This silver wire wrapped bangle bracelet with blue crystals is one of the first bracelets that I made. I was still learning how to effectively wrap the wire so that the bracelet would stay together and look pretty, and was still figuring out how to make a simple clasp. 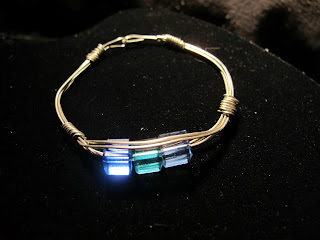 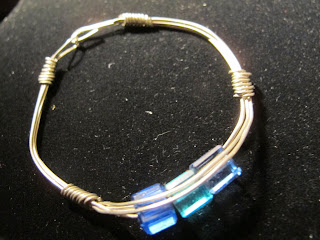 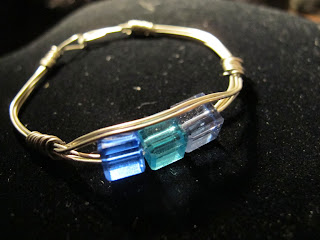 Over the years, this particular bracelet has gotten a lot of notice. I've worn it a few times and always receive compliments. While it hasn't gotten tons of views, it was always admired at craft fairs. I think that people like that it's very simple, but striking. This was the bracelet that people would pick up, try on, say, "Oh, how pretty!" Then they'd say, "I'm just going to look around for a while, but I'll be back." And then they never returned. This seriously happened with this bracelet about four or five times. I even had a friend who planned to buy it... and then found that she didn't have enough cash on her. I offered to let her pay me back later, but she refused to do that. I didn't want to push her on the sale and didn't bring it up again... and so I'd bring it from craft fair to fair where it would ALMOST get purchased.

Well, this morning someone finally bought it! Hooray! It's funny because in the last month I've sold several of my "classic" items. While I'm always happy to make a sale, it feels good to be cleaning out my old inventory. It feels like I'm moving ahead in my life and the business; it also reminds me that I made the right decision to become a jewelry designer -- even back in the days when my skills weren't as sharp.

I've had this bracelet for so long that I'll miss it a little when it's shipped out. But I'm glad that it will have a new owner and hope that she enjoys wearing it for a long time. Check out the rest of my jewelry at Naomi's Designs or MayaGirl Creations.