It's September, start of Fall Craft Fair Season... which means it's time for another edition of "Weird Tales From The Craft Fair."

My latest event took place on Sunday. It was my neighborhood's local Community Arts Day and I was happy to participate. Vendors are juried for this event and though this was my third time selling at it, I was rejected for its second year. I no longer just assume I'm going go get in and was thrilled to be chosen. Here are some shots of my table. No, I do not know who Jeff is... 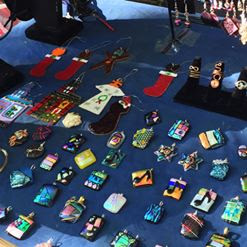 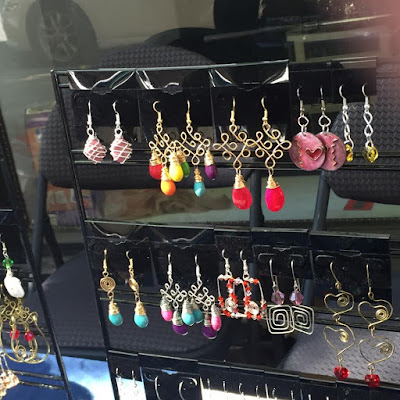 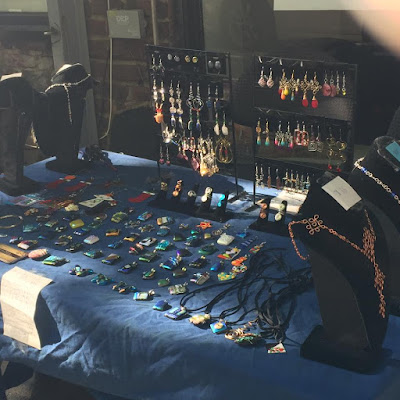 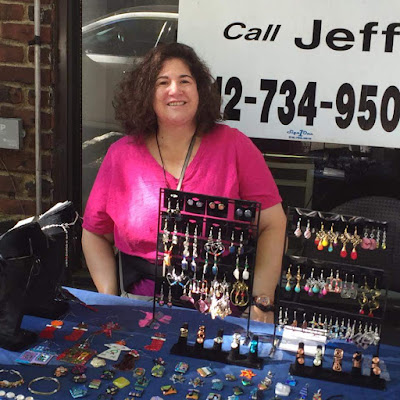 I was worried about being put on a side street rather than on the main road. Even worse, my table was put right under a shop awning and birds pooped on the table (thankfully NOT on the jewelry!!!). My friend Lani was with me, though, and she stayed calm -- and insisted that a bird pooping means good luck.

I'm not sure if it really does bring luck, but we actually got a lot of traffic and Lani was the best sales partner I could've asked for. She has retail experience and is a natural "people person." I always chat with people who approach the booth, but she managed to close a few of the trickier sales. For instance, one woman liked a pair of silver wire wrapped spiral earrings, but thought they were too long. Without missing a beat, Lani said, "Oh, she'll shorten them right now. Give her five minutes." I did... and the woman ended up buying the earrings and a matching bracelet.

There was also a woman who couldn't decide between two pendants. I thought she was just going to give up, but Lani talked her into settling on one ... and she purchased that and matching earrings. Thanks to Lani, I made more at this fair than I ever had.

I have to give myself some credit, though, because I worked my butt off preparing for this event. I spent many late nights finishing glass pieces and came up with new ideas for designs. A few people purchased my wire work, but most of my sales were the dichroic glass.

As always, I met some interesting people throughout the day. The first person to purchase something from my table was a politician, our neighborhood's councilwoman! She was really nice and bought a glass Star Of David pendant. Soon after, I was approached by a woman who was wearing a beautiful wooden necklace. When I asked her about it, she explained that it wasn't made of wood, but was constructed of polymer clay designed to look like wood. She took my card and later e-mailed me to send me some links about working with clay. This might be something my senior students enjoy doing, so I'd like to look into it.

I did see some familiar faces, too. My husband, Jon, stopped by to help me set up and take down the table. I was also visited by good friends Judith, David and Leah. Our favorite "visitor," though was the black and white cat who appeared in a window of the apartment across the street. He sat for almost an hour watching us from his perch. Lani named him "Belvedere." Obviously, we don't know his real name or even his gender, but we enjoyed his company!

I didn't take too many breaks, but during lunch, I took a quick look around at the other booths. A few vendors returned from previous years, including a young woman who paints striking abstract portraits. Last year, she only sold large paintings and a few other vendors suggested she sell smaller, less expensive pieces. She followed the advice and ended up doing well this year.

One of the first-time vendors, who had a booth near me, makes tinfoil sculptures. His stuff is amazing! His most popular item was his foil roses. Leah and David purchased a tinfoil dinosaur for their 4-year-old son.

Overall, it was a great day, but there's no time to relax. Tomorrow, I have another fair AND a gig at the Atria. In the morning, I'm selling more of my glass pieces and in the afternoon, Judith and I are performing a bossa nova program. We're playing pieces such as "Girl From Ipanema" and "Agua de Beber." As a flutist, I love Brazilian jazz, so I'm looking forward to this.

Meantime, the holiday season is quickly approaching, which means much more jewelry-making for me! Check out the rest of my collections at Naomi's Designs, MayaGirl Creations and Glass By Naomi.

I have several new items to share, but first some very exciting news: my jewelry is now being sold in Threading-N-More salon!

I've been getting my eyebrows done here for years and have always admired the colorful jewelry on display. Finally, I got up the nerve to ask the owner if she'd consider buying some of my pieces. She agreed to take a look -- and ended up purchasing 36. Woot!

Now I just have to hope that my jewelry actually sells for her. If all goes well, this will be an ongoing gig. She has three salons so my work would be featured at all. If customers don't like my work, well, she gave me a chance, which is so, so appreciated. I've been trying to get my stuff into stores for a long time and haven't had success. I'm thrilled to have this opportunity.

One person who DOES like my work is the owner's young daughter. As I took out my necklaces, the little girl promptly put each on, so she was wearing all of them at once. She then stacked all of my bracelets onto her arm. Later, a few of the necklaces got tangled, so she helped me pull them apart. As she did so, she said, "I feel like I'm fishing." Then each time she successfully untangled a necklace, she'd announce, "I caught another fish!" It was very cute.

The owner purchased several of my fused glass pieces, as well as a couple of my enamel necklaces. But she and her daughter really liked the wire wrapped jewelry I made with briolettes. I designed these pieces specifically for our meeting: 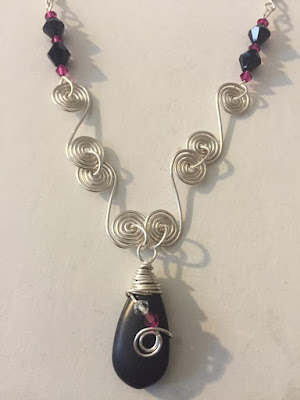 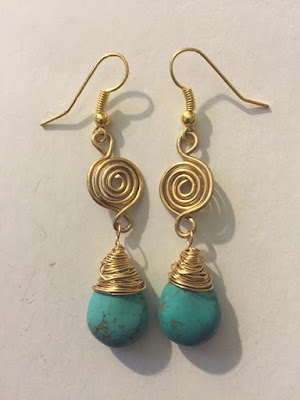 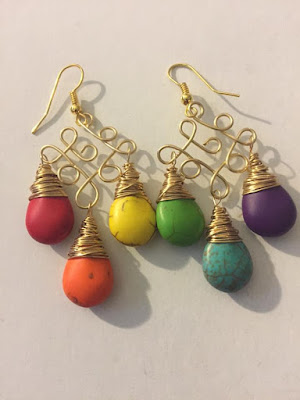 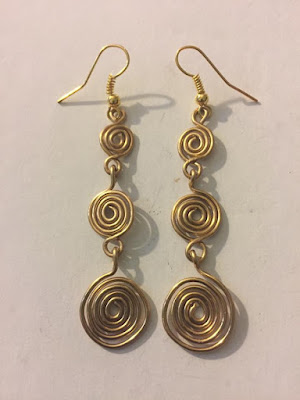 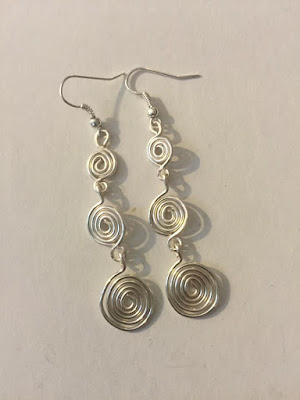 These briolettes were a gift from a frequent customer of mine who's also requested a bulk order. I've been working with this woman for months and she's become a friend. When she heard I might be getting this salon gig, she sent me several bags of briolettes as a "Good luck" gift -- and they worked! So my work on one large order led to another. This customer prefers I don't mention her by name, but I can't even begin to express how grateful I am to her. Every artist hopes they'll meet someone who believes in them and gives them their "big break." She's that person for me.

OK, enough mushiness! Let's talk jewelry. I wanted to make pieces that highlight the briolettes so I chose colors and accents that matched. I've always liked the combination of pink, silver and black so when I saw the large black briolette, I went right for the silver wire and fuchsia crystals. Meanwhile, I wanted to do something to show off the colors of those rainbow briolettes, so chandelier earrings seemed like the best bet. This was the most convenient way to feature all of them.

I have large red briolettes and originally designed earrings where they hung from a big spiral. However, these earrings are too heavy for the average person, so I made a modified version using smaller stones and a thinner gauge wire. These are perfect! I also made a version with silver wire and purple briolettes, which I forgot to photograph. The salon owner loved these, so if they sell, I can make them in a variety of colors and wires.

In other news, I was again accepted into the local art fair, which is September 25. I'm especially excited about this year's event because I plan to exhibit my fused glass pieces. I sold them at the little fair I did at the home a few months ago, but this will be my official "debut." I'm already working on some new jewelry sets and will continue to make new pieces up until the day of the fair. I'm also excited because my friend Lani will be visiting that weekend and will help me work the booth. Lani is an absolutely fantastic saleswoman, with a background in retail and telemarketing, so I'm putting her to work! I'm hoping my glass will set itself, but if anyone can close a deal, it's her.

Sorry for the lack of posts, but as you can see, I've been busy! I'll have more pieces to share and will keep you updated on my latest goings-on. You can check out the rest of my handmade wire wrapped, glass and enamel jewelry at Naomi's Designs, MayaGirl Creations and Glass By Naomi.