Great news! That local craft fair not only accepted me as a vendor -- they're featuring my handmade wire wrapped necklace on the poster! 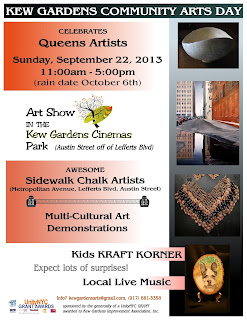 I'm really looking forward to this particular event. As I mentioned in my last post, it takes place on September 22, which would've been my grandmother's birthday. She was always very interested in my jewelry making so she'd be happy to know that I'm doing this. I kind of feel like she's looking out for me.

I also love the location for this particular fair. It's taking place in a very small, but cute park that's next to our neighborhood's indie theater. The park is tucked into a corner behind the building, but there's a beautiful mural on the wall that features drawings of old movie posters, and there are a lot of trees. I often hang out there en route to the post office (which is right up the block) because it's so peaceful. It'll be nice to spend a few hours there. It's also centrally located, so hopefully a lot of passers-by will stop in and purchase my goods.

So far, I haven't had much luck with craft fairs this year, but I'm hoping that this fall will change that. Meantime, check out my jewellery at Naomi's Designs and MayaGirl Creations.

September is almost here, which for New Yorkers means it's time to go back to school! In my case, I signed up for two jewelry making classes at the 92nd Street Y: my usual enameling and a new workshop, where participants make keyhole bracelets.

I'm not really sure what making a keyhole bracelet involves, but it seems like it'll be interesting. Truth be told, I'm missing classes a lot. This summer has been fun, but it's dragged -- and I miss learning new things each week and seeing my friends. I've gotten a lot of work done on my novel, but it's work that I do by myself. I'm also sick of people trying to "help" me find jobs. Many are very well-meaning and are like, "Oh, why don't you teach music to babies? Or to seniors? Or teach a writing class?" when they don't realize that you can't just pop in and begin a profession in these things. I have no desire to get an early childhood or music therapy degree -- or a PhD -- which is what you need for these types of jobs. I LIKE writing novels and I LOVE making and selling jewelry. Sure, neither is conventional in terms of a career; they're not 9-5, but I worked a 9-5 job for years and grew tired of it. I'm happy doing what I'm doing now; why can't people understand that and support me?

Anyway, back to my classes! I'm looking forward to working on more champleve pieces in enameling. My plan to spend time at the Brooklyn studio hasn't worked out, mainly because I've been busy, but I'm hoping to head down there this week. Meanwhile, I think that the keyhole bracelet course will help me improve some basic techniques, such as soldering. Either way, I'm really looking forward to it -- and to fall in the city. 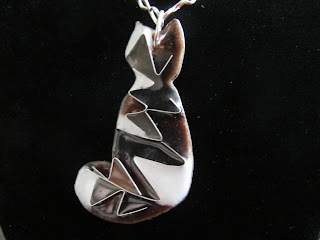 A few weeks ago my friend had her first child, a baby boy. I'd already given her a gift for the baby shower, but wanted to bring something for the baby's bris. I figured that she'd already received tons of baby clothes and supplies, so I figured I'd make something just for the mom. Too often, new moms are kind of overlooked as attention is lavished on the baby -- and I wanted to remind her that she's important, too.

I ended up making this silver wire wrapped bracelet that spells out "Mommy." I then made a matching one for her mother that says "Grandma." Both celebrate the fact that there is a new baby in the family, but they're gifts meant for the adults. I added a blue Swarovski crystal heart in honor of the baby being a boy. 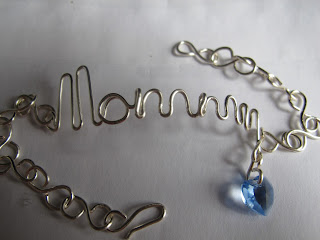 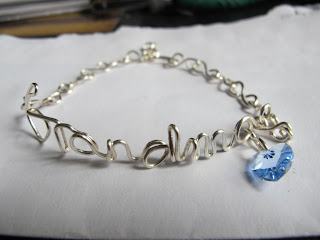 To be honest, I'm not sure if my friend and her mom liked my gifts. They thanked me when I handed them over, but didn't really look at what I'd given them. Understandably, both were so distracted at the time and my friend was still very sore from her C-section. I hope that at life begins to calm down (somewhat) that they'll appreciate my gift, as well as their new roles in life.

To purchase these wire wrapped bracelets or my other jewelry, head to Naomi's Designs or MayaGirl Creations.

My jewelry businesses have been rather quiet this summer, but happily, things are picking up. I've been getting a lot more orders -- after a looong lull -- and have gotten several invitations to craft fairs.

One is a repeat of a fair that I did last year, which I really enjoyed; it was held at a temple in Patchogue. I'll be participating in that one again at the end of October. The second was for a large craft fair company. It sounds promising, but the fee is pricey and I've vowed not to participate in fairs that charge more than $100 for registration. The third sounds really interesting: it's for a tiny, local fair that's being held right down the block from me.

The fair organizers actually contacted me on Etsy and are looking for artists from Queens. They only need 20 vendors, though, and because of that, the event is juried. I've never done a juried event before; I usually just sign up and I'm in. But it seems as if they're going to be very selective. They asked for three photos, so this is what I chose: 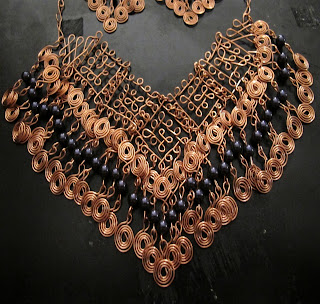 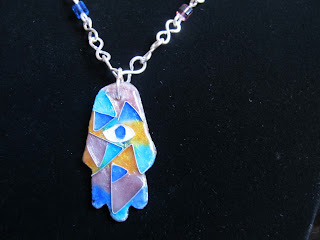 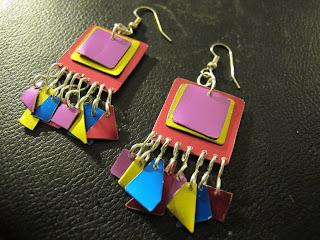 The first piece is my wire wrapped bib necklace that was a finalist in the 2012 Firemountain Gems And Beads contest. The second is an intricate enamel piece made with silver foil and silver cloisonne wire. The third are fun earrings that have attracted a lot of attention. I figured I'd show the different techniques that I know -- wire work, enameling, metalwork -- and the diversity in my pieces. I hope they like my jewelry and invite me to be in this event. What's more is that it's going to be on September 22, which would've been my late grandmother's 97th birthday. She died last September, right after her 96th birthday, and was an artist herself so she always supported my jewelry making.

I'll keep you posted on this fair. Meantime, check out my jewellery at Naomi's Designs and MayaGirl Creations.