Sorry for the long break between posts, but I've been busy getting ready for my next craft show, which is on May 1. This weekend, I made seven new items: two bracelets, two pairs of earrings and three necklaces. I'm trying to add some more variety to my inventory so that I can appeal to more tastes. Hopefully, I'll have more success at this show than I did at the last one.

Many of the items I made this weeked contained mixed metals. I absolutely love the way that different metals look together -- silver and gold, brass and bronze, copper and silver ... there's just something elegant about metals and when you combine them, they really go well together.

For the bracelet pictured on this page, I went with a mesh design and attached each link so the lattice looks like a continuous piece. I alternated the brass, silver and gunmental (copper) links to create the pattern and what I love about it is that even though I only used three colors, it comes off looking like more. Also, in some lights the colors appear to change; when paired with the brass and silver, for example, the gunmetal almost looks red.

The really great thing about mixed metals is that they go well with everything. You can wear this bracelet with an evening gown or with jeans and a T-shirt -- and it'll look beautiful in both cases.

I'd eventually love to learn some soldering skills so that I can combine metals in other ways. But for now, I'm having a good time experimenting with different types of metal wire.

To purchase my jewelry, head to Naomi's Designs. 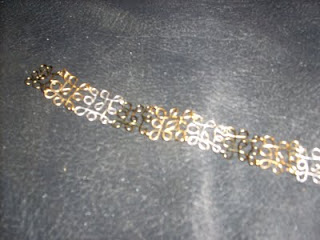 My First Craft Fair, a.k.a. Tales From The Dark Side

Today was a big day, my first craft fair. As you can guess from my blog entry title, it had its ups and downs.

Jon and I got up at the butt crack of dawn to get to this thing. I figured that it would take me a while to set up my jewelry, so we got to the lot about two hours before the event. Many other vendors were there already, so there was a festive spirit in the air. Unfortunately, there was also a lot of wind, so my stuff kept blowing over. We attempted to put up a tent, but the entire thing blew away, so we didn't bother. We then tried to hold down my displays with masking tape and rocks, but even then, the strong winds would knock down my things.

Still, I was determined to make the best of things even though I was freezing my ass off, tired and annoyed that my jewelry was getting tangled by the wind. But I tried to enjoy myself. I chatted with other vendors, I ate some yummy chocolate pretzels ... I people watched. There were a few other jewelry booths there, but I seemed to be the only person selling original, handmade stuff.

At 10 a.m., the fair officially opened, but there was very little traffic. Everyone said it was because of the chilly weather and the fact that it's the beginning of the craft fair season. Either way, it was frustrating. A few people glanced at my booth, but didn't say anything. I sat and shivered because I was so cold.

Around noon, things perked up. My parents stopped by to say hello, though they didn't buy anything. Then my friend's little sister came by. She's been meaning to purchase my jewelry online and decided to see my stuff in person instead. She liked a bracelet ... but didn't have money. I put it on hold for her.

Later, people finally began to stop by. I had many potential buyers compliment my pieces and my talent, and ask for a card, but I think my prices (which honestly weren't that high) scared them off. I lowered them a bit for the next interested parties and one woman came close to buying a necklace. But then her evil friend said that the Swarovski beads looked like plastic. There went my sale.

Many more people came by to look and take a card. See, I don't get this. I'm the type of person who either buys something or doesn't, so I don't see why they have to wander around until they make up their minds. Needless to say, no one came back. I have a feeling that my business cards will end up in the garbage, but I'm hopeful. One lady asked me to hold a necklace and earring set for her granddaughter and promised to return. She didn't. Another woman asked if she could buy just one earring. I was willing to bargain it, but she decided not to.

Finally, FINALLY, the crowd began to pick up around 3:30, and a woman bought two pairs of earrings from me. That was my only sale for the day. But I did learn some things. A) I need to lower my prices, especially for the second show I have coming up. B) I need to talk to the customers more; they seem to like that C) Some vendors told me that this particular company doesn't get good crowds, which I saw today. So I need to find a company that does better advertising.

The bad news is, I didn't make much money. But the good news is that people seemed to really like my work. They called it "unique" and "so pretty" and kept saying that I was talented. Many said that they liked that it's different from the average jewelry out there. So I think that with better advertising and lower prices, I'll have a better time at the next show. Glad I got this one out of the way!

To purchase my jewelry, head to Naomi's Designs.
Posted by N.R.E. at 4:25 PM 1 comments