I'm currently in the middle of one of the busiest weeks I've had in a while. The tarot fair begins Wednesday night -- aaarrrrgh! -- and I have a gig tomorrow. Meantime, I had my second run at Ridgewood Market on Saturday. 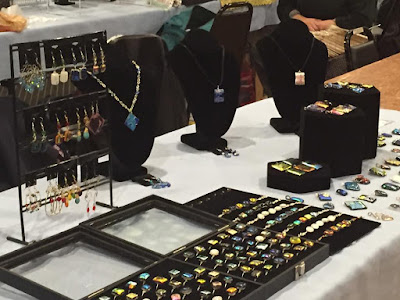 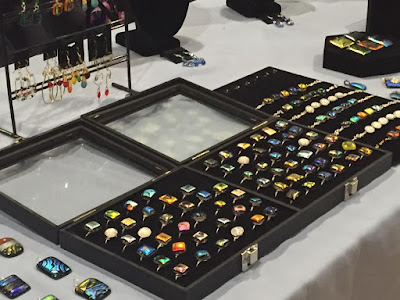 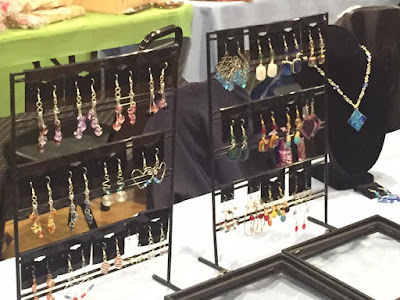 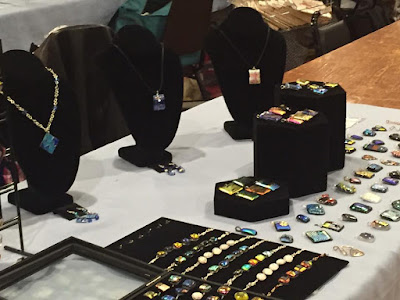 My husband, Jon, and I are avid walkers and are training for Avon's 39.3-mile Walk To End Breast Cancer, which is in October. So when I mapped the market and saw that it's not even five miles from our home, I suggested we walk there -- especially since it was supposed to be a beautiful day.

Bad idea. Though five miles isn't that long a trek for us, it's a much different experience when schlepping craft fair paraphernalia. Also, it rained. On top of that, we discovered that about a mile of the path that goes past a cemetery is unpaved and without a sidewalk ... even though it's on a main road. Needless to say, plodding through a dirt path in the rain with a suitcase and bags wasn't fun and by the time we made it to the market, we were both kind of cranky. But we did it! We walked the entire way and didn't give in to catching a bus, even though several drove by. Happily, the market is held in a German beer hall, so Jon rewarded himself with a beverage and I indulged in delicious potato pancakes.

I set up my booth pretty much the same way I did last time. I really love those risers I purchased. They're an effective way to arrange my glass pendants and add a little depth to my display.

Last time, I joked that I wanted to be seated across from the man selling animal parts instead of a bakery stall so I wouldn't be tempted to have too many treats. Well, guess where I was placed? Apparently, he and his wife, who makes ragdolls, have sold their items at every Ridgewood Market since its inception four years ago. Good for them! I'm wondering how many people buy jars of animal parts, but he must do well if he keeps returning. Indeed, there were many people who stopped by his booth to look at his stuff.

Unfortunately, not as many folks visited my booth as I'd hoped. Even though the fair is indoors, the rain kept people away and the crowds weren't as big as the last event's. Still, I did make a profit and, as always, met some interesting customers.

I'd made several pairs of wire wrapped earrings for the market, but my customers ended up buying a variety of items. They purchased a few glass pieces, as well as wire wrapped ones, and even an enamel pendant. I'm particularly excited about finally selling this pendant, which was a double-sided cat, because I've had this piece for several years and it's special to me. One side is a ginger cat and the other is calico; I created it in honor of my friend, Laura, who runs the Marmalady Facebook page. Marmalady is a tri-pawed cat who "blogs" about her adventures and raises money and awareness for the sanctuary Cat House On The Kings. She has nine kitty siblings and one canine brother. Jon and I actually visited Laura and her animals in 2015 and I made a version of this pendant for her. The orange side represents Marmy and the calico side was to honor her then-kitten, Willow (Willow is a big girl now and Laura has since gotten three more cats!).

Anyway, a woman approached my booth and admired my glass owl pendant. She then asked, "Do you have any pieces with kitty cats?" Well, she came to the right place! I'd actually placed several of my glass cat pendants on a riser and she enjoyed looking at those. However, she chose the Marmy/Willow piece instead. She was thrilled when I told her about Marmalady. I think jewelry is much more interesting when there's a story attached.

Three of the women who purchased from me asked if my crystal pieces are healing or if my rainbow briolette earrings helped align chakras. This amused me since I'll be selling at the tarot fair and have been trying to get my work into metaphysical shops. I wasn't even trying to reach that audience at this event, but they came to me! I was honest and said that I couldn't guarantee that my jewelry would heal or align anything, but that making my pieces is always a positive experience for me, so they do have good energy in that regard. This satisfied those customers and they all bought items from me. I had a long discussion about jewelry making with one of the ladies and suggested she come to the Reader's Studio convention next year.

There were a few people who didn't buy anything from me, but had a lot of questions about my glass. Some folks treat these fairs almost like a museum, where they'll admire the products and ask questions, but not spend money. That's fine with me. Obviously, I'm there to make sales, but I'm happy to discuss my passion, as well. One woman took my card and explained that she produces a local cable show and invited me to be on it. We'll see if she actually gets in touch, but that could be a lot of fun if anything materializes.

I still haven't figured out what appeals to this group. Last time it seemed as if they wanted more wire items, but they also liked the glass. Jon believes that my variety is what's attracting them. Next month's fair is during the day, so it'll be a different crowd of people. I'll continue making a bit of everything.

The evening ended early since the crowd had dispersed around 10, but I had a great night! By then, the rain had let up, but Jon and I took the bus home. The next time we explore Ridgewood by foot, it will be without bags.

Check out the rest of my jewelry at Naomi's Designs and MayaGirl Creations. 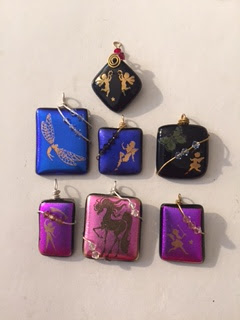 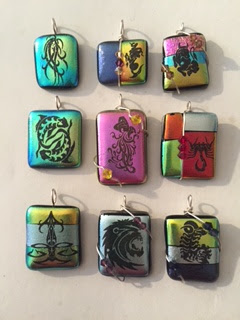 At the beginning of the year, I wrote a post called "Pounding The Pavement," where I shared my plan to finally get my jewelry into some more stores. Well, I have some great news! Things are going surprisingly well -- knock on wood, fingers crossed -- and I have some exciting opportunities coming my way.

As you know, I've been making tarot and spiritual-themed pendants for the upcoming Reader's Studio convention. When I told a friend about this, she said, "You know, you teach at a cemetery and will be selling jewelry at a tarot festival. You need to hit up new age and metaphysical stores."

I decided to take her advice and contacted a handful of stores that sell metaphysical, occult, new age and spiritual gifts. I included photos of my tarot pendants, as well as my Zodiac pieces, fairy pendants, tree of life jewelry, etc. Several places have already written back! One in particular is very interested in my work and wants to feature my pendants in two stores. Meanwhile, the store in Upstate New York is still working out a deal with me.

As of now, I still have to finalize my sales with these stores, which is why I'm not mentioning them by name and am being a bit vague. Basically, the owners have to decide which particular products they want, how many items and whether they'll be sold wholesale or by consignment. Much as they like my work, they're still running businesses and have to work out details.

I'm obviously very excited about these developments, especially since the first store I had products in, Threading N' More, is unfortunately closing. However, I'm trying to stay grounded and realistic about the process. I know all too well from publishing that deals can fall through. They can decide that my pieces ultimately aren't right for their stores, my work may not sell ... or a store can close. Anything can happen. It means so much to me that they even like my work enough to consider it. I figure I'm on the right track and this is a numbers game. I just have to keep making jewelry and networking. I'm confident that SOMETHING will happen to me eventually. My big break will come!

Once my jewelry is actually in the stores, I will include more details and links to these places. Like I said, I have my fingers crossed and am looking forward to the future. Meantime, you can check out my jewelry at Naomi's Designs and MayaGirl Creations.

It's only a few weeks until the Readers Studio tarot convention and I've been busy! I'm very excited because I actually managed to find tarot card decals. They're designed by a wonderful shop called Stained Glass Elements. The artist makes all sorts of unique glass decals, including a set of the 22 tarot cards from the Major Arcana -- a suit in the 78-card deck. 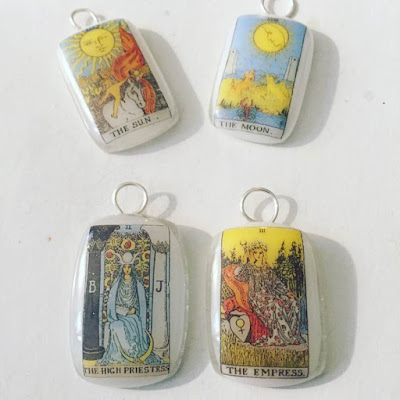 The decals came with 27 pieces, representing the 22 cards: 21 larger pendant decals and then six tiny "World" card images. Each of the bigger decals is about 1 1/2 by 1 inch; the perfect size for a pendant. I made several wire wrapped statement necklaces, featuring a spiral and crystal design. The rest will be simple pendants attached to a cord. I then used the "Worlds" to make tarot rings and charm bracelets. Because the decals are on a clear backing, I used a simple white glass base. 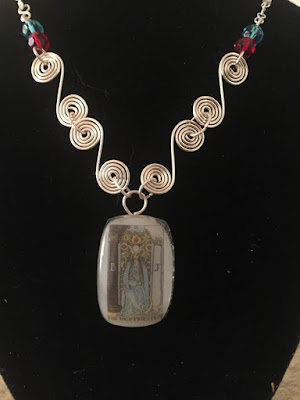 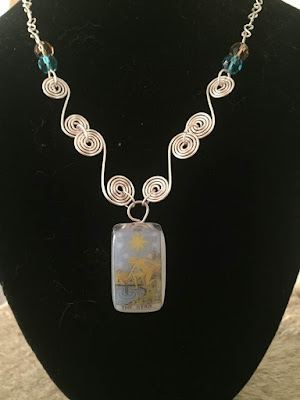 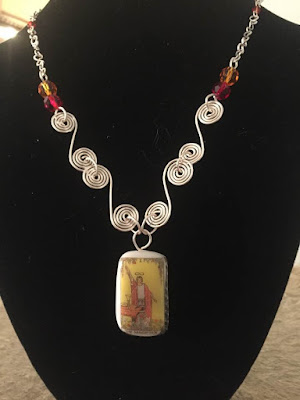 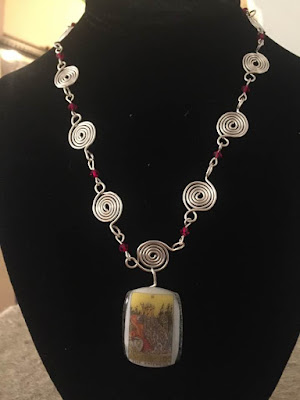 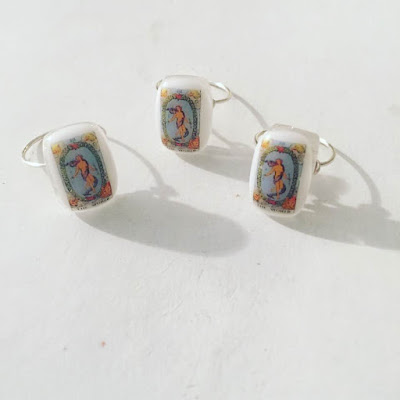 I'm still learning the basics of tarot, so it felt a little weird to be making "Death" and "Devil" pendants. For the fancier necklaces, I went with more pleasant images, like "The Star" and "The Magician." However, my friend Judith explained that all of the cards will hold meaning for people and that some might want a "Death" pendant if it's associated with their birth sign. She likes my plan of selling fancy and simple necklaces, noting that men and women can wear the cord-based pendants.

Making these pieces has helped me get to know the cards in the deck, or at least the ones from the Major Arcana. My favorite is The Star. I love the strong woman who's confident in her nudity and the contrast between the blue of the water and the sky. What's interesting is that this card is apparently Aquarian and I'm an Aquarius. Again, I really don't know much about tarot or astrology, but it does make sense that I'd be drawn to this particular image.

A funny thing happened when I was firing my last batch of pendants: I placed a couple too close together, put the heat on a little too high ... and "Death" and "Justice" fused. It was freaky! When I showed my husband, who is an attorney, he joked, "Sounds like a day in the office." I cut them apart so they wouldn't crack, but it was an odd coincidence that those two cards happened to connect.

I really hope that the convention attendees like my work. I think I'm portraying the cards in a way that's beautiful and respectful, but still reflects my jewelry style. For more of my handmade jewelry, check out Naomi's Designs and MayaGirl Creations.