I got a call from a friend the other day, who said he'd found a box full of old costume jewelry in an attic. Naturally, he thought of me and figures I can take the pieces apart and use the various elements.

My first instinct was to say, "No, thanks," because I've been making more and more of my own focals and pendants. But then I thought, well, I still buy ready-made beads and it isn't like I've never re-used parts from another piece of jewelry.

<> A few months ago, I got a message from a customer who asked if I could make her a pair of statement hoop earrings. She'd had a favorite pair which she'd damaged and wanted me to create something similar. I get this type of request often and told her if it would be helpful if she sent a photo of the old pair. She did, and I got to work.

The earrings were a pretty simple hoop design with a series of silver beads in the center. The problem was, I don't own many silver beads. I just don't work with them that often. I prefer using colorful crystals so I literally only have one bag of silver pieces.

Still, I wanted to see if I could make these earrings without having to order extra materials. I found the bag of antique-style heads I'd purchased years ago. I actually think these might have been the very first beads I bought when I got into jewelry making in 2010. I took out a few that I thought would work for these earrings, but many of the beads didn't have a matching twin. The beads would look similar, but were noticeably different -- which just doesn't work for earrings.

I managed to find a few matching pairs, but still didn't have enough beads to make the pattern she liked. I then remembered the beaded necklace my aunt and uncle had given me a few years ago. This was a beautiful necklace with blue crystals and little silver spacer beads. I haven't worn the necklace in a long time and well... I cut it and took off the silver bits. They're encouraging of my jewelry career, so I knew they'd understand. Sure enough, they just laughed when I later told them.

I ended up creating the following earrings and hoped the customer would like them. They didn't really look like her old pair, but they were a similar style. It would suck if I'd destroyed my necklace for nothing! 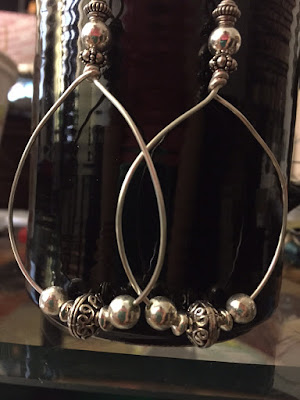 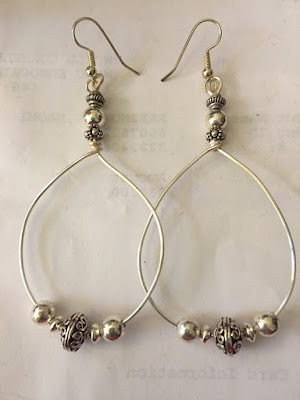 Happily, the woman loved the earrings and sent me thank-you note saying how she was "obsessed" with my design and liked it better than the original. She then went on to explain that the earrings she'd damaged were part of the collection of a well-known reality star-turned-designer -- and that she thought I could compete with said designer. I guess this is a compliment? I'm not really into imitating popular items, though. I much prefer doing my own thing.

These earrings are pretty, though, and have a very classic look. I'm glad I wasn't able to find the exact beads so I could at least add SOME originality to them.

Check out the rest of my handmade wire wrapped, enamel and glass jewellery at Naomi's Designs and MayaGirl Creations.