Any creative person, whether you're a writer, artist, musician or jewelry maker has to expect criticism at some point. I've gotten it in pretty much every venue I've been involved in. In college, I told a music professor to eff off because he didn't think I took playing the flute seriously enough (his argument was that I was a journalism major instead of a music major). And when I attempted to get a novel published a few years ago, I was forced to develop my thickest skin ever. Of course, there are people who don't like my jewelry, which is understandable; everyone's tastes varies.

However, my biggest critic so far is ... my cat, Maya. Maya is very lucky because we never dress her in sill costumes or make her wear a collar since she's strictly an indoor cat. But when I began making bracelets, I realized that they could double as cat tiaras. I put one on Maya's sweet little head and she looked absolutely adorable, just like the princess she is. This is our Maya: 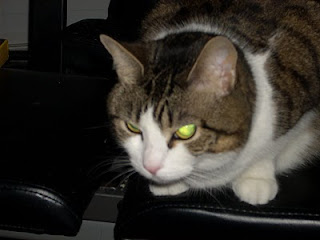 Anyway, Maya looked up at me and narrowed her eyes. She then shook her head, tossing the bracelet onto the floor with a "Mraow!" of disgust. I grabbed another bracelet and put it on her head; same thing. I got it; she did not like my jewelry!

Later that day, I put my jewelry down so I could take some photos and as soon as I was about to snap the picture, she jumped into the frame. This happened two more times. She then knocked the jewelry onto the floor. Guess she didn't want me to be able to photograph it for Etsy.

Even though she doesn't like my work, I'm happy with how this bracelet with turquoise blue crystals came out. I love this color blue because it reminds me of tropical waters, like the blue we saw when we were in Hawaii or Puerto Rico. I also like the square crystals and the way that they pick up the light.

I know that I won't be able to please everyone, but hopefully, I'll be able to win my cat's approval sometime soon. Perhaps if I made her a blinged-out collar...?

To purchase my jewelry (which I'll bet your cat or mom or friend would love!), head to Naomi's Designs or Naomi's Studio. 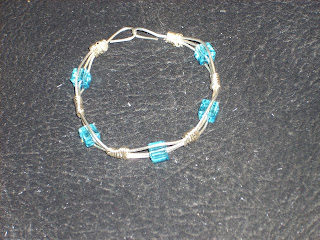