Sometimes I feel as if I have a secret identity. While I haven't hidden the fact that I make jewelry from anyone at work, I don't really go around talking about it either. A few people know about my outside interest -- I did make my boss some earrings for her birthday -- but I don't bring it up that often. That said, a bunch of my colleagues were surprised today when I clued them into my Facebook page for Naomi's Designs.

I hadn't planned on mentioning it, but the woman next to me wanted me to "Like" her FB page. I replied that I would if she liked mine (which she did). She and the woman across were surprised to hear of my new venture and had a lot of questions about it.

It's kind of cool having a bunch of different "personalities." There's Work Naomi, who writes for a TV magazine, and Writer Naomi, who keeps several blogs. Then there's Musician Naomi and now Jewelry Maker Naomi. Sometimes they cross over -- as in this blog -- but mainly, I keep them pretty separate. Though when I play flute at my friend's wedding this summer I'll probably wear my own jewelry, so I guess those two aspects of myself will meet up.

I think that everyone needs some different personalities. If you do the same thing all the time or are only known for one thing, life can get pretty boring. So I encourage anyone reading this to try a new skill, whether it be a sport or gardening or making jewelry. You just never know if you'll like something until you try.

Now that you've met my mulitple personalities, here's a fitting necklace for the day: my abstract silver necklace with Swarovski crystals. To make this, I basically played around with wire, bending it into all different kinds of shapes. I then added multi-colored crystals. I was trying to make a Picasso-looking item, but well, it's hard to mimic Picasso. Still, I like it and have decided to call my art, "Naomism." Not sure what that says about my personalities, but I'm confident that it's positive!

To purchase my jewelry, head to Naomi's Designs or Naomi's Studio. 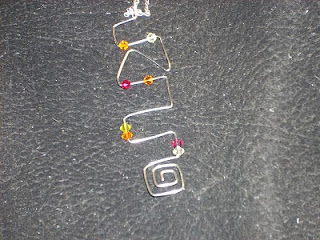