I first saw dried lava when I was in Hawaii about six years ago. I never knew that lava -- which is porous and black -- could be beautiful, but it really is, especially when there are large sheets of it.

When visiting Hawaii, however, you're not supposed to take pieces of lava home because it's bad luck. There are all sorts of stories about people getting cursed after bringing home lava. We didn't want to take a chance, so we left it alone!

Still, when I saw these round lava stones being sold, I was inspired to make something with them. Each one is like a blank canvas and I wanted to build pieces of jewelry that obviously looked like jewelry, but also brought out the beauty of the rock.

For this pendant, I went with a simple wire wrap design. I didn't want to completely cover the rock with wire, so I used it as a frame. I then added just two small crystals to finish it off. I feel like the black, silver and blue play well off of each other and work together in a finished product. I've been told that it looks like a Native American piece, which is a huge compliment.

I've been experimenting with other types of rocks, as well, but I still like lava the best. When "dressed up," it's especially eye-catching.

For more of my work, head to Naomi's Designs. 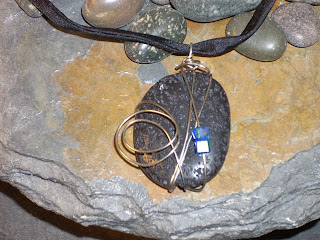