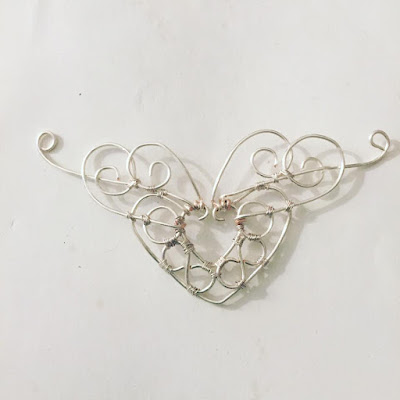 I often get customer orders where I'll be asked to replicate an item that was lost or broken. This was the case when a customer recently asked if I could make a copy of a Celtic knot heart necklace she'd once owned and had misplaced.

To get started, she sent me a photo of her old necklace. This piece had been made with thick silver, which had been cast and soldered. I explained that I don't solder and could do a version that's wire wrapped instead. I noted that while I wouldn't be able to do an exact replica, I could make something in a similar design.

I've never made any pieces involving Celtic knots and they're pretty complicated. My way of working through this was to tackle the pendant piece by piece. I had to do a lot of adjusting so that I could incorporate the wraps. I swear, sometimes I feel as if I'm a structural engineer...

My first challenge was creating the heart within the heart. The original consisted of a much larger outside piece and then inner knots kind of "floated" within the frame. However, I needed them to be close to the edge so I could effectively wrap and attach them. Because of this, the double heart is a bit smaller than the original.

Next, I needed to make and attach those outside scrolls. Making them wasn't too difficult, but securing the 14-gauge wire took some trial and error. At first, I centered the scrolls on top of the heart and wrapped them with a bundle of thin wire. Unfortunately, the scrolls looked "bunched up," as my customer noted, and the wraps were way too bulky. Also, the thin wire I'd used was a shade darker than the thick, which gave the piece an industrial look -- definitely not what she wanted.

I purchased 26 gauge wire in a lighter shade so it would blend more easily and reoriented the scrolls so they were closer to the initial design. They now flow outward and are not squished in the center.

Those loops on each end are actually open curls in the original, but I had to close them so the chain will stay attached to the pendant. I also added an extra loop on the innermost scrolls so they'd be easier to wrap.

I put a lot of time into creating this piece and hope the customer likes it. As I said before, it doesn't look exactly like the original, but there was no way for me to make an exact replica when using different techniques. I'm always nervous when showing a finished result to someone who'd ordered a custom piece. Hopefully, it's close to what she wants!

Though I've been spending most of my time on glass jewelry, I'm still learning new ways to work with wire. Even if the customer ultimately rejects my work, I feel that I have at least gotten something out of the experience by trying something different from what I've done.

Check out the rest of my handmade jewelry at Naomi's Designs and MayaGirl Creations.