The first time I got my ears pierced, I was eight years old. I say "the first time," not because I have multiple piercings, but because I had to get the same holes re-pierced three more times. I kept letting them close up and would get frustrated when I couldn't fit the earring in. For the fourth and final time, the piercer didn't even use a gun; she simply shoved the earrings through the bit of hole I had left. Ouch!

I guess I can understand why my parents refused to let me get double-pierced ears, which were all the rage in 1985. I was 11 and wanted a second hole more than ANYTHING, but they said one pair of earrings was enough. I attempted to pierce my own ears (don't try it; it hurts!) and eventually devised a method where I'd wear a long earring and stud crammed into the same space. It actually did look as if I had double-pierced ears and my parents didn't object.

As obsessed as I was with having pierced ears, I know plenty of women who've never wanted them. My mom hated the idea of having holes in her head. My sister-in-law let hers close up and didn't bother to get them re-pierced. My mother-in-law never wanted to get hers pierced and simply wears clip-ons.

Most of the ladies whom I know from playing at senior residences also wear clips. I learned this the first time I did a vendor sale at the Atria and several asked if I sold anything other than pierced earrings. I decided it was time to add clip-ons to my inventory. I then got a specific request to make them when I did a sale at another local senior home. 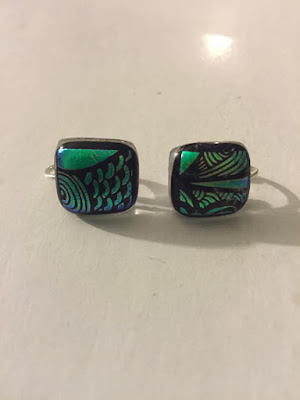 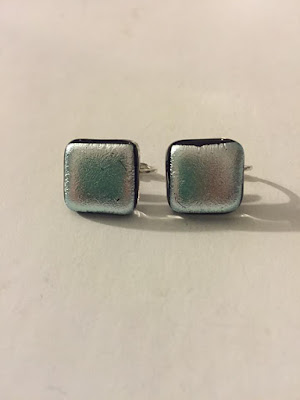 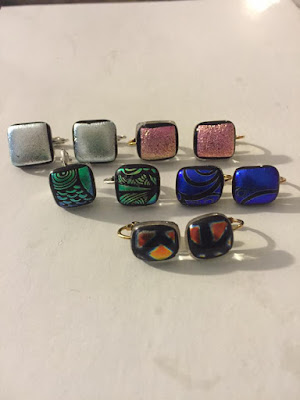 Wire wrapped pieces don't work so well for clips or stud earrings because you need a very solid mass to attach to the backings. However, fused glass is perfect! It's durable and sturdy and the earrings fit well against the findings, which are ready-made. I simply made the pieces and then glued on the backs.

I cut the glass into small pieces -- each about 8-10mm and used only two layers for each: base glass and a color. I'd made three-layer stud earrings, which were very pretty, but they were also quite heavy. I almost sold a pair at the fair I did in September, but the customer ultimately turned them down because they were hurting her ears.

The two-layer clips are light and comfortable, though. Wearing clips felt weird when I tried them on, but I quickly got used to them.

I'm not giving up my pierced ears. I've had them for so long and there's a lot more variety out there for pierced earrings. But I'm happy to offer variety to those who wear clips.

Check out the rest of my handmade wire wrapped, fused glass and enamel jewelry at Naomi's Designs and MayaGirl Creations.