My second jewelry making class is scheduled for this upcoming Tuesday and I'm really looking forward to it! In this session, I'll be teaching the ladies how to make wire wrapped, beaded earrings and rings. Most of my students don't have pierced ears, so I purchased clip-on backs. I've never used those before, so we'll play around with them together.

Meanwhile, I've been working on some earrings of my own. Lately, I've been experimenting with different glass firing techniques, including underfiring the glass and using multiple layers. I've finally figured out how to make triple layer pieces.

I've been trying to do three-layered glass for a while, with mixed -- mostly poor -- results. The top layer of glass would move and break during firing, or the bottom layer would melt incorrectly. This was actually how I destroyed my first kiln; by attempting to fire three layers. The glass turned into a goopy, burned mess, stuck to the sides of the kiln and wrecked it.

I've since learned from that mistake and now stop the firing process midway to make sure the glass hasn't moved out of place. This way, I can guarantee the glass hasn't melted and stuck to the sides. Still, I haven't had too much success with doing three layers... until recently.

The trick is to make sure all of the pieces are even and that the top layer isn't hanging over the edges. You also need to make sure the dichros are flat. Dichroic glass comes in all sorts of forms -- thick, thin, textured, smooth... and when you place a strip of textured next to a strip of smooth, the surface isn't even. Therefore, when you try to place another layer over it, the glass will move. That said, I've found that tripling works best with small pieces and when I use only one type of glass at a time.

I've practiced this technique by making earrings, which feature dichroic glass sandwiched between two layers of clear. So far, I've managed to have a few successes: 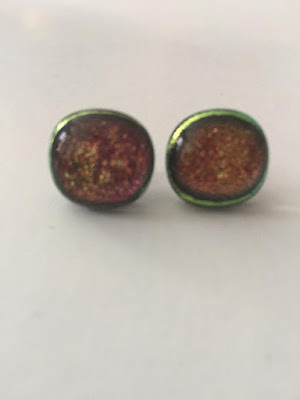 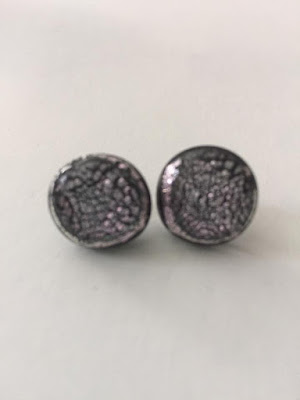 I absolutely love that yellow-pink glass. It's fuchsia in certain lights and gold in others. And with the glass on top, it looks almost green from some angles. I'm not thrilled with the pink crinkle glass, though. It looks really pretty when it's fired as the top layer, but when it's under the clear, it has a weird distorted appearance. Still, the technique worked and I'll just have to try it with different colors to see how they fare.

In other news, I'm in talks with my local salon about them possibly selling my jewelry. I showed some pieces to the owner and she's very interested. Hopefully, we'll set up a meeting for next weeks and she'll buy some of my merchandise. I haven't had any luck with getting my stuff into stores, so I'm trying not to get my hopes up... but at least she's showed some interest. That's better than an outright "No," right?

I'll keep you up-to-date on my latest jewelry happenings. You can check out my work at Naomi's Designs, MayaGirl Creations and Glass By Naomi.