Last Saturday, I sold my jewelry at Astoria Market's pop up shop, which was held at St. Paul's Church in Midtown Manhattan. The beautiful, old church is right near Columbus Circle and has a huge, cavernous hall, which is where all of the vendors were placed. The weather outside was definitely not frightful -- it was gorgeous, actually -- and New York City was full of tourists.

Unfortunately, this event which should've been very high traffic only attracted about 50 people. It seems like the organizers basically took our registration fees (which were pretty high) and ran, and didn't bother to do much advertising. I never even saw the organizers at the event. Usually there's someone there to check you in and say hello, but no one official seemed to be around. Most of the vendors were very angry and swore not to go with this company a second time. This WAS my second time with Astoria Market and my first fair with them was also a bust, so I agree: they don't seem to know how to get customers -- or just don't care.

As usual, though, plenty of interesting things happened throughout the day! It began at 8:51 a.m. when my husband and I took the LIRR in to Penn Station. Usually the morning trains are pretty quiet on weekends, but on this one, we found seats near a group of drunken, rowdy Santas. Jon didn't believe that they were drunk ("It's too early for that," was his argument), but all of the Santas were holding beers. One then had to well, go, and used his water bottle. Yep, he did his business right there on the train! Talk about being naughty...

Once at Penn Station, Jon and I saw hundreds of people dressed like Santa. Apparently, these people -- and the drunken train Santas -- were participating in the annual SantaCon. Still, seeing so many of them at once was surreal and kind of funny.

Once we made it to the church, I set up my booth and settled in to relax as someone turned on holiday music. Though I don't actually celebrate Christmas, I really like holiday songs and enjoy getting into the spirit of the season. Some jazzy versions of Christmas songs played for a while; the classic "We Wish You A Merry Christmas" then played. And played. And played. And played. And played. The song literally played over and over again for at least an hour. Finally, Jon decided to do something about it so he found the guy who was supposed to be in charge of the music. That guy explained that his booth partner had left for a while and he couldn't get up to change the CD. Aside from the fact that his booth would've been fine had he asked someone to man it for him for a few minutes, I don't understand why he didn't ask someone to change the CD for him. But whatever, this is what Jon offered to do. My husband then mercifully turned off "We Wish You A Merry Christmas" and the church hall erupted into grateful cheers. Jon was hailed a hero!

Since we didn't get too much traffic, I had a lot of time to work on projects so I made some new wire wrapped items. Here's my wire wrapped spiral bangle bracelet: 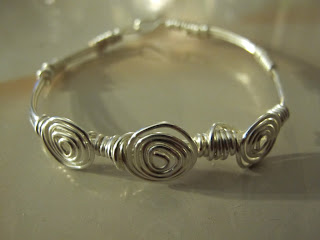 And this is my silver wire wrapped snowflake necklace: 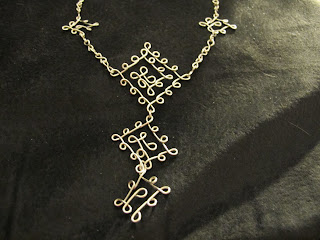 While I unfortunately didn't get to see too many customers, I did get some great feedback from other vendors. Many of the other jewelry designers were impressed with my work and enjoyed watching me in action as I made my pieces. One woman asked if I teach classes! All of this was very encouraging.

I'm a little disappointed because the holiday fairs in which I participated didn't go as well as I'd hoped. I'm not sure why -- maybe I picked the wrong ones? Happily, I had many online sales so it was still a profitable time for me. I still plan to do fairs next Christmas, but I'm not spending a lot on registration fees. I'll stick with small, inexpensive events.

I'm glad that my online stores did well, though. It's nice to know that my work is appreciated!