Believe it or not, we don't often have a white Christmas in New York City. December is usually pretty cold, but it tends to be a drier month. The big snows typically fall from January-March. We're having a very snowy season, though, and the weather keeps getting in the way of my enameling class. I skipped class last week because of the snow and it looks as if we're having another storm tomorrow, which means I'll probably miss it again.

A few inches of snow isn't that big of a deal for us, but I still don't enjoy traveling in it. The streets can get icy and there are often train delays. I'm fortunate in that I work from home so I don't *have* to travel if there's bad weather. When I'm nice and cozy in my warm apartment with my cat by my side, it's much easier to just stay put!

I'm disappointed because tomorrow is our last class of the semester and we won't be meeting again until the end of January. Still, I'm pleased with my progress. I made several interesting pieces this fall and learned a new skill: champleve. I also sold many of my enameled jewelry, so the class isn't just fun for me: it's profitable.

Next semester I'd like to try some new skills. My teacher has suggested that I experiment with sifting techniques; I'd also like to enamel objects that aren't flat, such as a curved piece of jewelry or even a bowl. As long as I continue to learn and have fun, I'll stick with this class. Just hopefully the snow won't keep me away all winter! 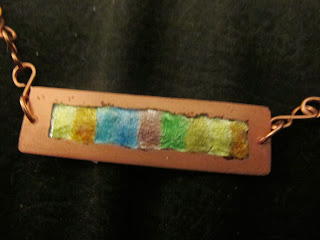 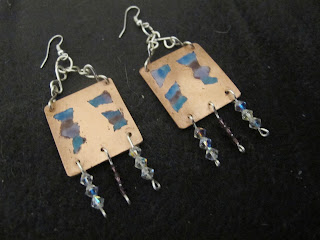