Thanks to my trip to California and Superstorm Sandy wreaking havoc on New York City, I missed my enamel class for two weeks. But I returned this Tuesday and managed to get a lot of work done. I ended up completing three new pieces, all of which I'll be selling at this weekend's craft fair: 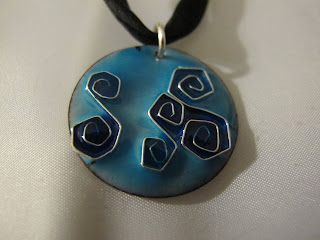 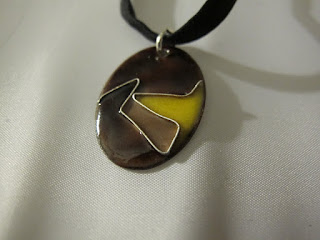 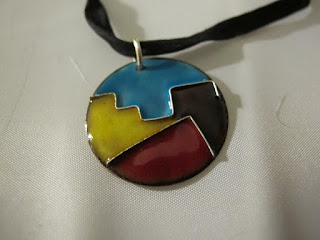 The first is pretty, but was a real pain the butt to make. This was one of those pieces where I had a clear idea in my head for what I wanted -- a pendant that looks like ocean waves and uses different shades of blue -- but things kept going wrong. My first try at this pendant went awry when I overheated it and the cloisonne wire melted. I started a new pendant from scratch and this time, the cloisonne stuck and didn't melt, but the wire moved during the process. This is why the spirals aren't next to one another; they were supposed to be adjacent so they had that wave effect.

Still, I went ahead and completed the pendant, and thought that it came out looking pretty good. Only after I fired it in the kiln, I realized that I'd sealed in the jumpring hole up top. My teacher drilled it for me using a special diamond drill, but the enamel on the back cracked. I refired it to close up the crack and the pendant stuck to the trivet, causing little black gashes to appear on each edge. I tried to cover them with more blue enamel, but it didn't work ... which is why you see that black speck in the corner. Overall, though, I'm happy with this necklace. My husband liked it when I showed it to him. He thought that the spirals were supposed to be flowers, but he loved the color scheme.

The next two enamel pendants were easier to make. I used a brown color scheme for the first out of sheer laziness; we happened to have brown enamel on the table in front of me and I just used what was there. I think it's pretty, though, especially with the drop of yellow. More thought was put into the bottom necklace, which was designed to resemble Native American jewelry. I used colors typical of the Southwest, like turquoise and red, and am really pleased with how it turned out.

My enamel pendants usually sell pretty well at fairs. Here's hoping that I have another successful Sunday!