I'm not sure what the inspiration was behind this crazy-looking piece. I kind of wanted to do something off-kilter and a little wacky. I'd just gotten a shipment of Swarovski crystal pearls and wanted to use them in an unusual way, not just strung along a necklace.

I began making spirals, not sure where they would head and eventually came up with this funky-looking necklace. Instead of putting the pendant in the center, I attached a bunch of smaller spirals and then wove the little pearls through them. I think it looks like a solar system with a bunch of planets and moons in orbit. It's very space age.

At a recent craft fair, people weren't sure what to make of it, but I like it. I think it's cool. Maybe it's not the most functional piece, but it's my attempt of using jewelry to make some modern art.

To buy my jewelry, head to Naomi's Designs. 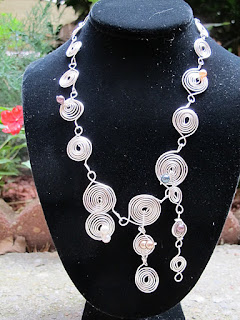