I've been called upon to do all sorts of custom orders, but about a year ago, I received one of my more interesting requests. A woman who recreates Medieval costumes planned to dress as Maria Portinari for a convention and asked me to make a version of the necklace. The painting by Hans Memling dates back to the 1400s and features a 14-year-old Maria on her wedding day. She was a member of Italian nobility and though little is known of her, she actually appears in another painting by Hugo van der Goes, where she's wearing the same ensemble and jewelry. This is Memling's work: 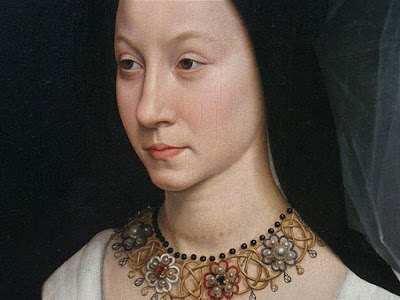 I often work off of jewelry photos, but copying an object that's on a painting was much more difficult. I wasn't 100 percent sure what materials were used or how each piece was connected. Even zoomed in to the painting, it was hard to get a perfect view. One of my friends, who is a mechanical engineer, took a look for fun -- and was also stumped by some of the workings of this necklace. He couldn't figure out if it was one piece where everything had been soldered together or if the black beads were a separate necklace. Again, that's the problem with copying a painting. You're not getting an exact picture (pardon the pun) like you would with a photo. You're getting an interpretation.

However, one of the great things about living in NYC is that I have access to some of the world's best museums -- and, as it turns out, this particular painting is part of the Metropolitan Museum Of Art's permanent collection. I visited the museum so I could see the painting in person and get a better read on this elusive necklace... and while the wing featuring the painting was open, the actual alcove where the painting hangs was closed for construction. I could see Maria from a distance, but could not get close to her. Damn.

Instead, I wandered around the beautiful Medieval exhibit so I could see what kinds of jewelry were worn in her day. I took notes on the styles, materials used, etc. Technically I was working. Yes, I did enjoy myself!

I still wasn't sure I had the skills to pull off this necklace, though, and was honest with the customer. I didn't want her to get a piece that didn't match her expectations. I love a challenge, but am also realistic about my skills. It's one thing to goof around and practice on my own, but I'm not going to make a sub-par product for someone who is paying.

Well, about a year went by and I again heard from my customer. She decided to go with a more simple design for her costume and was still interested in having me create one of my wire wrapped filigree pieces. This I could do! So I made her a longer version of my filigree anklet. It's definitely not a replica of Maria's elaborate necklace, but it does have that Medieval "flavor." 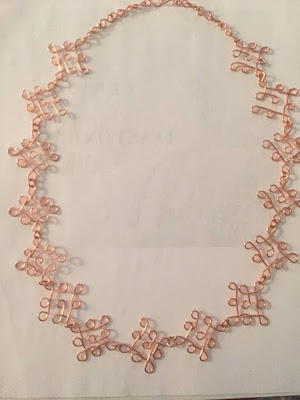 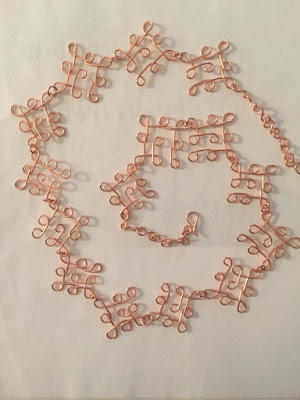 In the end, I didn't successfully make a true Medieval necklace, but I enjoyed being part of this project. It's not every day I get to design jewelry for a historically-inspired outfit! Now I hope that the next time I visit the Met, I'll get to see Maria up close and personal. Maybe I'll even wear some filigree in her honor.

Check out the rest of my handmade glass and wire wrapped jewelry at Naomi's Designs.