So far, April is shaping up to be a crazy, busy month! On April 9, Jon and I will be celebrating our 17th anniversary. 17 years!!! Where did the time go?! There is also Passover, our niece's birthday ... and craft fairs galore. I've been invited to Ridgewood Market's next event on April 22. Then, from April 27-30, I'll be selling Naomi's Designs at the Readers Studio Merchant Faire. Whew!

I wasn't sure if I should sign up for Ridgewood next month because it's so close to the tarot convention, but Scott said to me, "Naomi, it's your JOB." He's right. I'm spoiled because I'm so used to working in the comfort of my home, but I should take the opportunity to sell at events if space is offered to me -- especially if it's a fair where I've done well. I enjoyed my experience at Ridgewood, so why not? Jon can sample more beers and I'll finally try one of the giant pretzels they sell there.

Since I have over a month to prepare, I'm making several new pieces each day. My plan is to fill another 36-slot ring box since I sold several of those last time. I'm making more wire pieces. I also plan to sell the $5 wire pendants I'd made for my sales at the senior homes. I figure the bigger the range of merchandise and prices, the better chance I have of getting customers.

I'll only have 3-feet of table space at the tarot convention, but I'm going to fill it with pieces that reflect the theme. I know next to nothing about tarot, but I did go to a salon which was hosted by the Readers Studio founders. I learned the basics and got some ideas for jewelry that the attendees would like. Using glass decals, I'm creating mystical-inspired pendants that are colorful and fun: 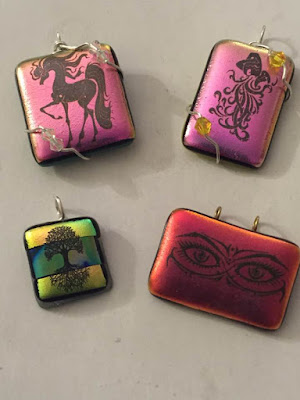 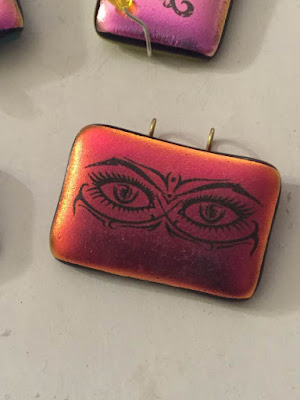 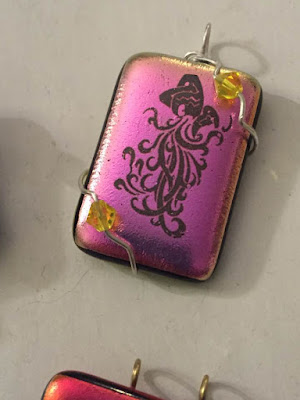 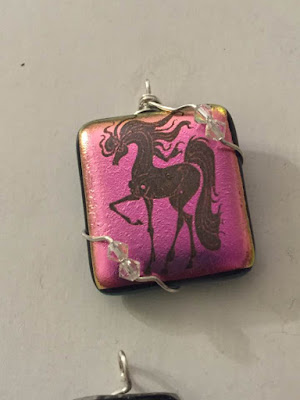 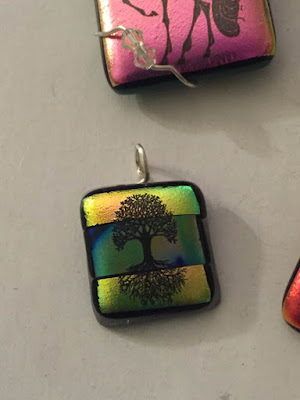 Out of this batch, my favorite is the red All-Seeing Eyes pendant. It's just so creepy and cool. Those eyes came with a set of decals I ordered that feature dragons, unicorns and Zodiac symbols. When I saw those eyes (no pun intended), I knew I had to make something with them.

The opportunity came up when I played around with different colored base glass. I usually use black, clear or white base glass, but after making so many items, I ran out. I was left with blue, green and red and wanted to see what happened if I mixed certain colors. When I use neutral bases, the solid dichroic "Candy Apple Red" turns orange... but when I fused it onto a red base, it turned blood red. I loved the shade and the pendant shape happened to be perfect for those eyes, so I added them on.

I'm not sure what they are. At first, I thought they were Eyes Of Buddha, but they don't match the other images I looked up. I guess they're just supposed to be all-seeing, all-knowing eyes.

I felt like the unicorn and Aquarius symbol needed some embellishment, so I added crystals, but the eyes work well on their own. Simple and ... eye-catching (pun intended this time!).

Check out the rest of my jewelry at Naomi's Designs and Mayagirl Creations.