Well, it looks like my wire wrapping class is set to begin on July 12. I'm so looking forward to this. I just hope that people actually show up for it. If all goes well, I'd like to teach classes at the other homes where I perform. I'd also love to teach a more "mainstream" class at a local Y or art store. I'm not qualified to teach at the 92nd Street Y, where I do my enameling -- the instructors there have Master's degrees in art -- but I'd still like to share my jewelry-making know-how on a smaller scale.

I'm still working on my own projects, too... including these fused glass dichroic pins: 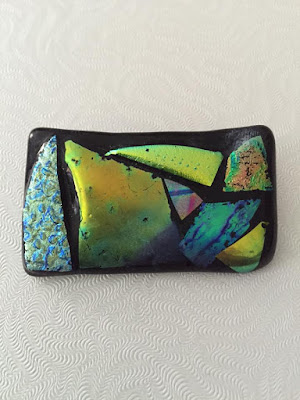 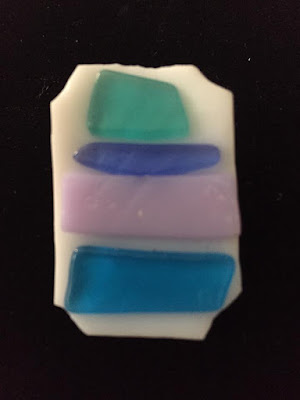 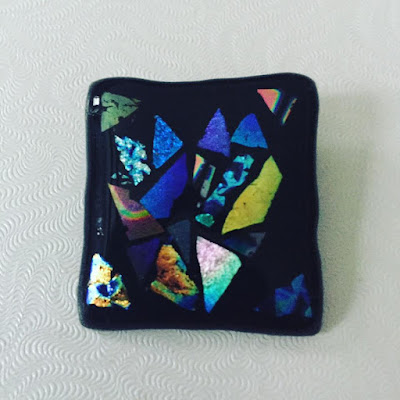 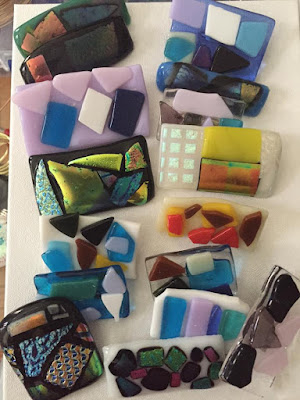 As you know, I took a glass-making class at the start of this year. I enjoyed the class, but came away with a bunch of disappointing "pendants." To me, they were too big and too bulky to be worn around the neck. I also thought they were kind of odd looking. However, when I showed them to a few friends, they were like, "Oh, those are so cool!" They actually liked the strange texture and shape of these pieces. My friend Judy especially likes the orange, yellow and brown one, which she's named "Fancy Candy Corn." Heh.

I still didn't want to turn them into pendants and instead attached pin backings to the pieces... and voila! I now had a set of pins. Or brooches. Is there a difference -- and if so, what is it? I guess "brooch" brings to mind the fancy cameos that my grandmother would wear, while "pin" makes me think of something more simple. Perhaps these are in-between.

I don't wear many pins, but I put one on for the Broadway songs performance I did a few weeks ago. I paired a blue and white pin with my blue and white outfit and the piece received some compliments from the seniors. I then set about designing some true brooches, made from dichroic glass. My kiln is tiny so these pieces juuuusssst fit in there. They also need a bit more time to fuse since they are larger. I've been firing them for my standard three minutes and then adding on more time in 15 second intervals. This way, I can allow them to fuse properly without burning.

I think my favorite pin, so far, is the small black one with that "fire" pattern on it. I was trying to make a mosaic tulip, but it came out looking more like a rainbow-colored flame. Though Judy says it looks more like a paw to her. What do you think?

Check out more of my handmade wire wrapped and glass jewelry at Naomi's Designs and MayaGirl Creations.