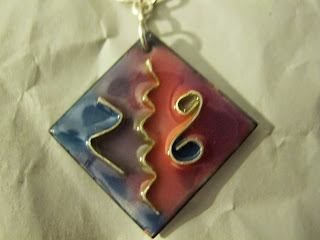 I've participated in many charity events relating to music, but this week, I was involved in a wonderful program that called upon my jewelry-making skills. A bunch of us from the 92nd Street Y signed up for "Beads For Love" and visited a nearby elementary school so we could help students make beaded holiday gifts for their loved ones.

About 30 5th grade girls signed up -- and about 25 adults! Seriously, there were as many adults as kids present and I feared that some volunteers wouldn't have anything to do. But everyone managed to find a kid or two to befriend, and the event was a success.

I sat down at a table with two lovely girls, I and K (I'm only using their initials for this blog). Both seem to have a flair for design, especially I, who made a complex necklace using small and large beads. Though her piece was only made of one strand, she hung her beads in a way which made it look as if it were a two-strand necklace. It was stunning!

Several bead manufacturers donated materials so we had beads in every size, shape and color. But the girls' favorite beads were these large, round gold balls that looked like disco globes. They were practically fighting over them; luckily, we had more than enough for everyone!

My job was to help the girls finish their jewellery and crimp the ends. We had a mishap when I dropped her necklace and all of her beads went flying. She was almost finished with it at this point and I expected her to freak out. I certainly would have! Instead she burst into giggles. "You know, you're handling this a lot better than many adults would," I told her. "Sometimes you just have to laugh at yourself," she said as she re-organized her beads. "Besides," she added, "Getting upset won't fix my necklace." Wow! Wise words from a 10-year-old! I'll think of her the next time I make a mistake on a piece and have to start over.

As K and I worked, we had plenty of time to chat and they told me all about their families and favorite subjects in school. I was disappointed, though, to learn that this school doesn't offer art or music classes. When I was in elementary school, these were my favorite subjects and I think it's important for kids to have an outlet for their creativity. Unfortunately, art and music are usually the first classes to go -- especially in NYC schools, where budgets are tight. It's a shame, because these girls could've beaded all evening if we'd let them. The two hours flew by and they were sad when they were told it was time to go.

The good news is that I spoke with the Y's jewelry program director and he says that he's already in the process of trying to make Beads For Love a more regular program. It would be great if we could visit the school (or even multiple schools) once a month. The director is trying to set it up so the workers would get paid, but honestly, I'd do it for free.

The Y is closed for the holidays so I'll be away from enameling for the next few weeks -- but this was a really nice way to finish up the semester.