Last week, I began an exciting new job: teaching fused glass at the Atria Senior Residence right near me. The Engage Life Director has titled it "Naomi's Jewels." Snazzy, right?

I've been playing flute there for two years and have done a couple of jewelry sales for the seniors, but the Atria was looking for some "different" programs to be included in the lineup. Glass jewelry fit that description! My class is being held once a month, which is perfect for my freelancing lifestyle. It's being held often enough that I can count on a paycheck, but is still rare enough to be special. Since I now teach at three places, I can rotate and devote time to each venue.

What's nice is that I already know most of the staff and residents so I'm not the "new girl." My close friend Judith is assisting me, so we're getting to do something together outside of music. My first class also happened to be held on the first day of the newest Engage Life staffer, so she helped out, as well. She's young and enthusiastic, and has an art background, so she was perfect.

The class is being held in Cafe Atria, which is a small kitchen area with tables and chairs, a toaster and microwave. It's adjacent to the front hallway, so it's open and bright, and people are constantly walking by. I like this set-up because it's much more comfortable than being crammed into a back room.

10 seniors showed up for my class, including two men! I rarely get male students, so I was delighted to see them there. One planned to make a pendant for his daughter, while the other just wanted to try something new.

I kicked off with my easiest project: making mosaic pendants. This is great first lesson because it lets my students play with the different types of dichroic glass. I cut about a hundred small pieces for them, giving them access to glass in many colors, textures and patterns.

The biggest challenge that comes from working with this group is that several have memory problems. I had to be extra-careful to keep them safe. I filed and blunted the ends of every single glass piece and constantly reminded them to not go near the hot kiln. I also assured them that if they needed help, they shouldn't be shy about asking. Some were able to assemble their pieces without assistance, but many did need help. They told us where to place the glass so they did have a hand in constructing their pendants. The idea behind these programs is to not only do something fun, but to keep their minds active. I'm so proud of the designs they came up with.

All of these students are in their 80s and 90s, but none have ever worked with glass. They were so enthusiastic and enjoyed learning something new -- even at their advanced ages. As one said, "It's never too late to try something different." I love that attitude!

Since I live so close, I fired the pieces at home and returned with them a few days later. The best part was watching the seniors open the envelopes with their jewelry. They were so pleased! Here are a few, showing off their work: 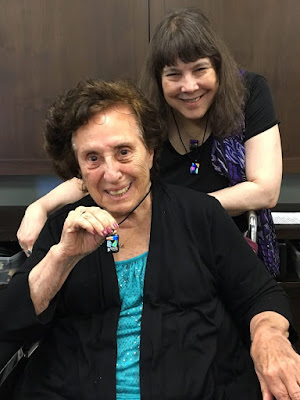 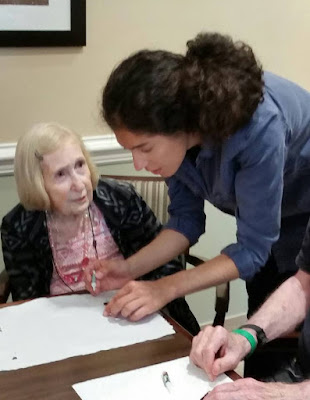 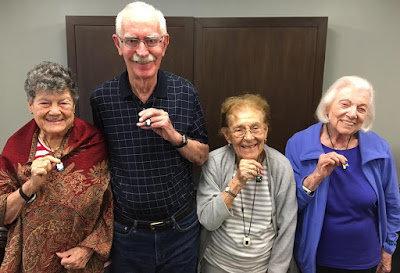 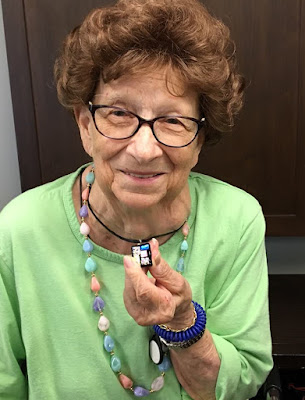 I returned to the Atria on Tuesday to do an impromptu Fourth Of July program with Judith. We played patriotic songs on flute -- and kazoo! -- and wandered all over the building. Many of my students were wearing their pendants and stopped me to say how much they loved my class. As cheesy as it is to say this, that meant so much more to me than the money (though I appreciate that, too!).

I've come up with a long list of projects and am so looking forward to this month's lesson. I never expected my music to take me in such an unusual direction, but I'm glad it did.