Now that I've taught a few jewelry making classes at Maple Grove Cemetery, I decided to take one as a student. I love teaching, but wanted to see what it would be like to relax and be on the other side of the table, so to speak.

Yesterday, I joined my friend Helen's jewelry art class. Helen put together frames with velvet backgrounds; we then glued old pieces of jewelry into designs. Here is my masterpiece, which is supposed to be a vase filled with flowers. Not my finest work, but I had a good time making it! 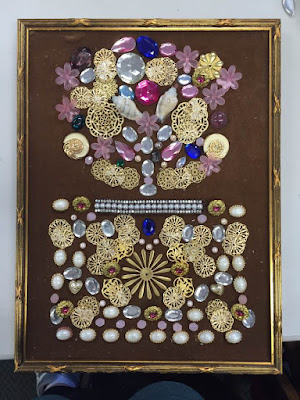 I always enjoy exploring the administration building because it's filled with so many interesting old items and is like a museum. At this workshop, we got a chance to sift through the bags and bags -- and bags!!! -- of jewelry. It was overwhelming! There were cabochons of every size and color, pearls, beads, gold pieces, decorative hearts, filigree pendants... you name it, it was there.

A few of the other women had done this project before, so they had great ideas. One made a giant shamrock filled with green beads. Another made a sailboat out of shells. And one woman made a silver and turquoise Southwestern-style cross for her ill friend. She actually brought her own beads to the class; they were from a broken rosary. Her design was so clever and turned out beautifully.

It took a few hours to complete our pieces, but I really enjoyed the company. I chatted with the other ladies, but no one bothered me during the times when I needed to zone out and concentrate. One of my issues with the enameling class was that the conversations always turned to stressful topics. I like to use art as an escape and don't want to spend that particular time thinking about politics or personal problems. I certainly don't want to block out reality altogether, but I need my art to be a refuge. In the Maple Grove class, it was the escape I was looking for.

In the early afternoon, we broke for lunch, where we were served our delicious meal of polenta and rice on hundred-year-old plates. As we ate, we were told tales about the cemetery's residents by our other host and local historian, Carl. According to him, Maple Grove includes the grave of George W. Johnson, a famous African-American singer from the late 1800s, who was known for "The Laughing Song," as well as the tomb of Count Joannes -- an actor who was so brilliant that thieves attempted to steal his brain from his plot.

I was especially pleased to see a couple of my students at this class -- and a few of them were wearing the pendants they'd made in my workshop. They were eager for me to host another class, which was really nice. I plan to have them make earrings during the next session.

I'm so happy that I discovered Maple Grove last year. It's a wonderful place and an important part of my town's history. I'm also grateful to have made some new friends.