I've had my microwave kiln for about a month now -- actually, I'm up to my second kiln, but I'll get to that story later -- and I can't believe how much fun I'm having with this thing! I love being able to make fused glass pendants whenever I want... even if there have been a couple of, er. incidents along the way. I have had some successes, though. Here are a few of my favorite pieces, so far: 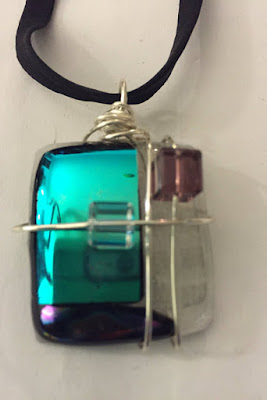 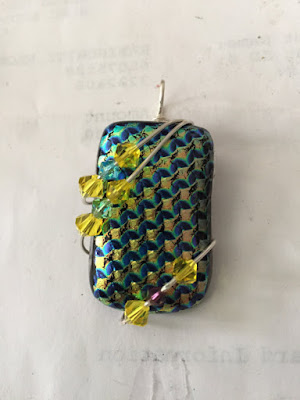 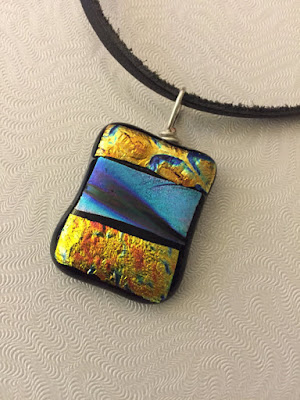 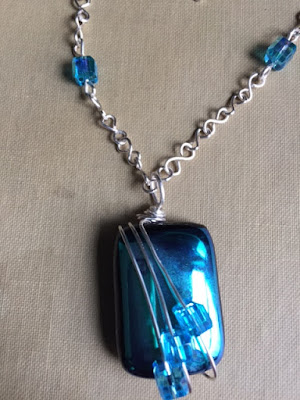 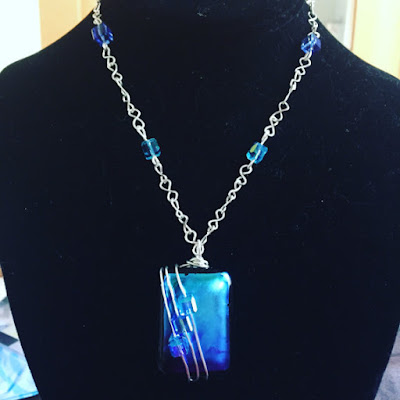 As you can see, I've taken to wire wrapping the dichroic glass necklaces and turning them from simple glass pendants into something even more exciting. Many of the pendants, though, are interesting-looking on their own and don't need the addition of wire or crystals. I let the patterns guide me.

Making fused glass jewelry at home is pretty simple, if you have basic jewelry-making skills. You need to know how to score and shape glass. You also need proper equipment, which isn't included in the basic microwave kiln kit. They give you a really crappy scoring tool, but you should also have cutting pliers, as well as a tool that lets you snip edges. I'm still pretty new to this, so I'm learning much as I go on. I'm thinking of purchasing an etching tool, too.

When making fused glass -- at least in a tiny microwave kiln -- you have to accept that this isn't an exact science. A lot of the pieces I've made have depended purely upon luck, though I'm getting much better at making things turn out the way I want.

The most important lesson I've learned so far is to not layer pieces too high. Generally, it's best to use two layers: a base color and then I usually put dichroic glass on top. That top layer should also be slightly smaller than the base piece. If not, it will slide off and cause a mess in the kiln. I learned this the hard way!

A couple of weeks ago, I attempted to make a three-layer piece using a black base topen ped with small dichroic cut-outs and then a piece of clear glass. This didn't work. The clear glass was heavier than the dichroic pieces and fell right off while in the kiln. However, it still melted when it was heated and stuck to the side. I almost set a fire in my kitchen, burned and cut my hand... and wrecked the kiln. Happily, these kilns aren't too expensive, but it was a costly and potentially dangerous lesson.

I now have a new kiln and fire my pieces in stages. Oddly enough, this kiln takes three minutes to heat the pieces, while the other -- which was the exact, same model -- took about four. I heat the glass for two minutes and check on it to make sure it's fusing together. If I see that any glass has slid off, I stop the firing process. If the glass is fusing well, I continue to fire the piece for 30 second increments until I see that the glass has turned molten and the sides are rounded. The first time I used this kiln, I set it for four minutes as I had with the previous one and my glass overfired, looking like a gray blob. Live and learn!

It is possible to do a triple layer, but the top pieces need to be the smallest. So if you layer, say, black with clear and then a mosaic of tiny dichroic pieces, it will probably fire well in the kiln.

It's also important to note that not all glass is created equal. I use glass that has a 90 COE (coefficient of expansion), but some brands' glass just doesn't work in the microwave kiln. One company (I'd rather not name them) has gorgeous glass, but it constantly breaks in the microwave. I really like Fuseworks and iDichroic's glass. They send a package of dichroic scrap and you get a nice variety. The glass also holds up well in the kiln. The other glass probably works very well in a traditional kiln, where you can take the time to fire a piece. But it falls apart in the microwave where the materials are heated quickly.

As times goes on, I'm getting better at cutting small pieces and EVEN edges. Like anything else, this takes practice. Happily, I love making fused glass and have been designing pendants every day. I'll show you more of my work along the way.

Meantime, check out my fused glass and wire wrapped jewelry at Naomi's Designs.