Once upon a time, my dad collected skulls. None were real; they were all made of plastic or plaster, but they were still creepy. One of his skulls wore headphones, another had a snake running through its eye socket .. and then there was the one hanging in our downstairs bathroom that glowed in the dark.

I thought that his preoccupation with skulls was a bit weird, but my parents then took me to Mexico. I went crazy for the crafts ... especially the colorful sugar skulls -- or calaveras -- designed to celebrate the Day Of The Dead.

Though death is a part of life, I can't say I've ever thought of the process as being beautiful. Quite frankly, the idea of dying scares the hell out of me. But I appreciate how the Mexican culture shows the beauty in death and how we always share a connection with our lost loved ones.

I'm always looking to try new things so I decided to make my own version of sugar skulls. They were so much fun to paint with the enamel! I made these last spring, but am posting them now since the Day Of The Dead is right around the corner, November 1. 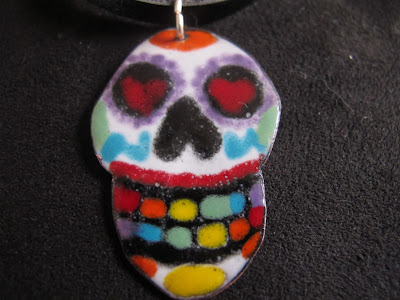 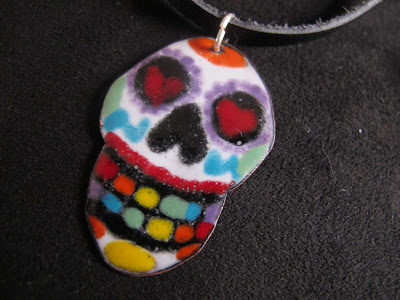 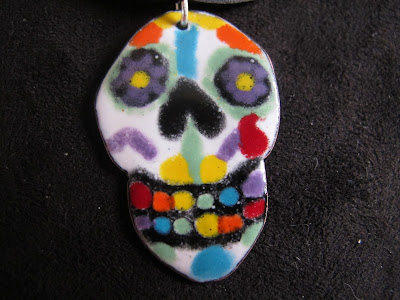 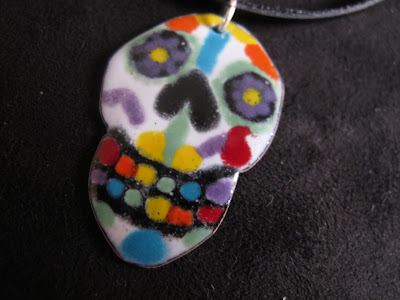 I cut, filed and smoothed out the copper base at home, but painted them in class. When you fire an enamel piece, the darker colors appear first and then the lighter ones show up as the piece cools. Because of this, it took about 30 seconds for the hearts and flower pupils to appear -- and it kind of looked as if the skulls were coming to life! It was really cool.

One of the women in my class doesn't like skulls and shuddered when I showed her my work. I joked that the skull with hearts in his eyes had a crush on her and that the one crying blood was unhappy because she didn't love him back. She was not amused.

I had a blast making these, though, and appreciate the painstaking work that goes into making a true calavera. Some of the figures and masks are so elaborate and have nearly every inch of space covered with designs. Mine are pretty simple.

I do plan to make more when I'm finished with my current batch of Christmas ornaments (post on them to come). Meantime, check out my jewellery at Naomi's Designs and MayaGirl Creations.