Customers often ask me to tweak my already-existing items to fit their needs. I recently had a woman purchase one of my silver wire wrapped daisy flower coil rings. 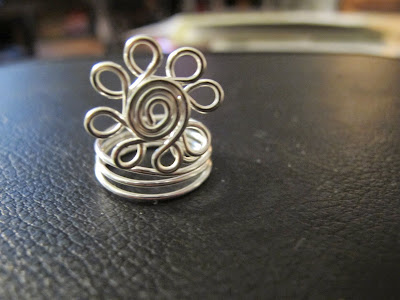 However, instead of wearing it as a coil, she asked if I could redesign it with the daisy sitting right on the band: 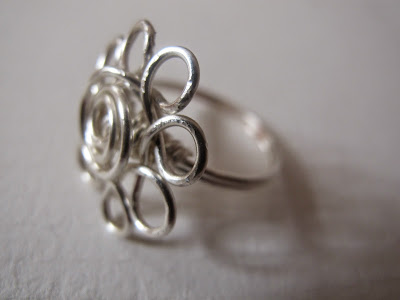 Believe it or not, this ring is made with a single piece of wire. My main concern when designing it was to make sure it looked neat -- and that there weren't pieces of wire and wraps sticking out all over the place. Basically, I wanted the daisy to look as if I had been soldered to the band... even though it was wrapped.

It took some trial and error, but I'm pleased with how it turned out. The daisy is actually quite secure on the band and really cute! I made the daisy a little bigger than I had with the coil ring version so it would be front and center: 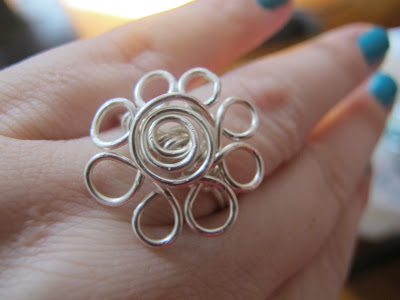 After successfully making this daisy ring, I played around with other designs where the ring's main feature was centered on the band. So far, none have turned out so well. I've tried using small Swarovski crystal pearls, but I think they're too bulky for this kind of ring. The pearls are sticking way out and I don't like the way they're sitting on the wire. I think pearls would work better if I strung the band through the pearl; I'll have to experiment. I think this design could work with crystal bicones; I'll have to see. But I at least know I can make these pretty flowers rings! That's the fun of making jewelry; even when my attempts don't work, I enjoy trying.

Check out the rest of my jewellery at Naomi's Designs and MayaGirl Creations.