For the past couple of months I've been working on the same enamel necklace. It was getting tiresome, so I took a much-needed break and made a couple of smaller abstract pendants. These aren't nearly as complicated as my work-in-progress, but they're pretty and well, FUN to make. The latter is what is most important to me.

I still need to polish and clean the other pendants, but here is the first: a blue, green, pink and purple piece. It looks a bit like a rainbow in the sky, though I wasn't really trying to make a particular design: I was just playing around with the silver cloisonne wire ... and it turned out that way. 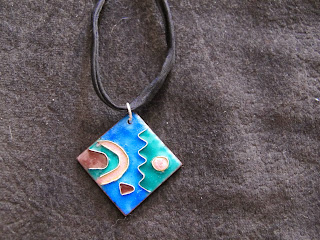 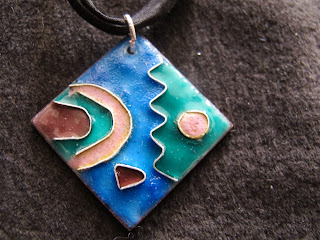 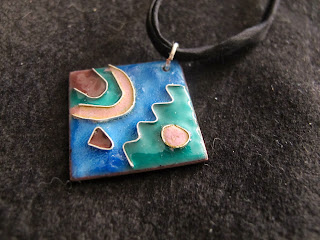 I've been trying to mix things up and use different colors, but I always seem to go back to blue enamel. What can I say? I like blue!

On another note, I learned today that my jewelry teacher has had some interesting students over the years, including Jenna Bush and Scarlett Johansson. Johansson took the enameling class during her senior year of high school, so this would've been right around the time she did Lost In Translation. My teacher says she joined the class with a friend and that both girls were really nice.

I'm not a big "Fan Gurl" when it comes to celebrities. I wrote for a TV magazine for 14 years so I dealt with actors on a day-to-day basis and the novelty got old quickly. Still, it's cool to hear you're sitting in the same room where someone so well-known once sat. Maybe my teacher's future students will be saying that about ME in a few years!!!

Meantime, check out my wire wrapped and enamel jewelry at Naomi's Designs and MayaGirl Creations.