Tales From The Art Fair

Yes, you read my title correctly. The event in which I participated yesterday was not a "craft fair," but an "art fair."

A while back I was contacted by my neighborhood's arts council and was invited to apply for this event. I never even knew that my neighborhood HAD an arts council, but it sounded as if it would be a great fair -- and indeed it was! For one thing, it was held at the small park that's right up the street from my home so I didn't have to travel. We also had perfect fall weather, even though the forecast had called for rain.

Only 20 vendors were chosen for this fair, but it seems as if the council chose carefully. There were a couple of painters, as well as a glass blower and a man who carved wooden bowls. One jewelry vendor made pieces by carving wampum (shells) and explained that he has to do his work under water with a special ventilator because the shell residue can dry out his lungs. Yikes! (and I thought using a kiln is risky!). His stuff was amazing, though, much different than anything I've seen. I really enjoyed seeing the work of other local artists.

As for me, I did really well at this fair! It's funny how much more seriously people take you if the event is called an "art fair" as opposed to a flea market or craft fair. But I made a lot of sales and people treated me with respect. I actually sold two high-end pieces this week -- one online and one at the fair -- and it feels good to know that people are willing to pay for my work.

I felt a little badly because the woman who purchased my double-sided "Fire And Ice" wire wrapped enamel necklace was a little confused about the price. She heard me say one thing ... and thought it was much lower than its actual cost. I had to correct her and was afraid that she'd nix the sale, but she just sort of shrugged and said, "Okay" and handed over the rest of the money. I explained to her WHY it costs what it does and she appreciated the amount of labor that was put into it. At other fairs, people would've been like, "That's too expensive." 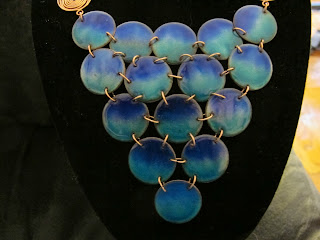 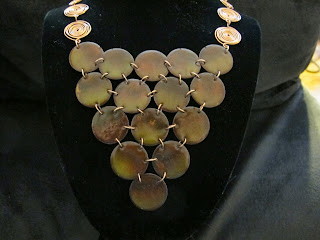 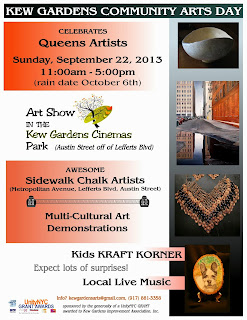 Not everyone who stopped by my booth bought my jewelry, but many asked questions and were genuinely interested in how I make my pieces. One woman told me that my work should be in a museum. I don't really agree with her, but it was such a nice compliment! Another young lady suggested that I make more statement pieces. I explained that some customers prefer to wear simple designs, but I'm now coming up with more statement design ideas, as well. Then there was a woman who kept trying to get her boyfriend to buy a piece for himself ... so that she could wear it, LOL. He didn't, but he did ask a lot of questions and was a good sport.

What's really cool is that my Nefertiti's Kiss necklace is now "famous," thanks to it being on the poster. Several people recognized it from the ad and came over to admire it. Woodcarving Man's wife told me that one of his bowls was on the poster, too... but when she brought it into her office, everyone was asking her about my necklace.

I'm glad that I did well with sales yesterday, but I don't only care about the money (though being able to pay the rent is a good thing). For the first time in a while, I felt as if I'm a legit artist -- and that my work MEANS something. A lot of people don't really understand my career(s); when I explain that I make/sell jewelry and write novels, they look at me as if I'm a big flake. Honestly, it was much easier to explain my work to others when I had my 9-5 job at the magazine. It meant a lot for me to have people recognize the labor that I put into my jewelry and to appreciate my creations. I'm not asking for others to fawn all over me as if I'm royalty, but getting respect is satisfying.