Last Thursday's class was actually really good -- much better than the first few. Only five students showed up so the teacher seemed to be much more relaxed and was actually able to take the time to show me stuff. She didn't seem to be annoyed with me for asking so many questions, as in the past. Maybe she just works better with a smaller crowd? I know that when I was teaching music, I much preferred one-on-one sessions than a classroom setting.

Anyway. I finally got to solder my ring! Basically, I had to place tiny bits on solder metal on the seam and then torch it. It was really cool watching it melt into place. Now my ring finally, well, looks like a ring. I just have to sand it even and clean and it''ll be finished.

Meantime, I showed my instructor my sketch for my next project, which is going to be a carved pendant with a set stone. She liked my idea and gave me some good suggestions, so I'm eager to get started. I'd really like to take a break from the ring as I've been working on it for several weeks, so I'm looking forward to working on something new. I'm feeling more confident around the tools (even though I'm still a spaz) so I'm less nervous about drilling and sawing out the design. I'll also be learning how to set a stone with bezel wire, so that'll be interesting.

As of now, I think I probably will take Jewelry II next fall. Though this class has been frustrating in some ways, I do like learning the new skills and I enjoy feeling like I accomplished something. I would like to learn how I can solder at home, though.

To see my (as of now) non-soldered jewelry, head to Naomi's Studio or Naomi's Designs on Etsy. 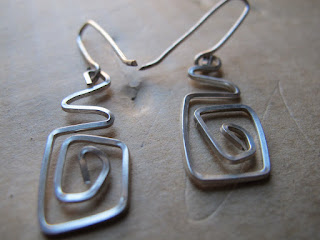 Email ThisBlogThis!Share to TwitterShare to FacebookShare to Pinterest
Labels: how to make jewelry, jewelry making class, metalsmithing, working with metal