Hurrah, spring is finally here! I'm looking forward to the warmth, sunshine ... and did I mention warmth? For me, spring represents the start of something -- the flowers bloom, the animals come out of hiding... and there's an energy in the air, especially in areas like NYC where we have cold winters.

In honor of spring, here are a few of my "blooming" wire wrapped and enamel jewelry designs. Check out my pieces at Naomi's Designs and MayaGirl Creations. 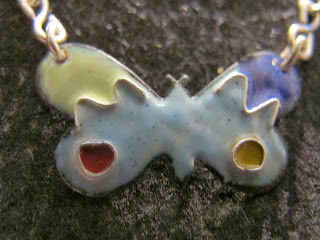 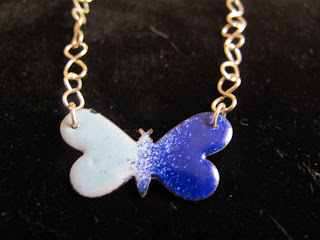 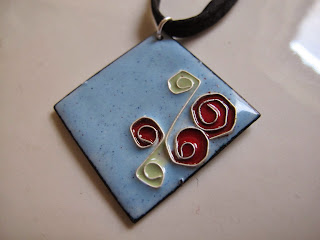 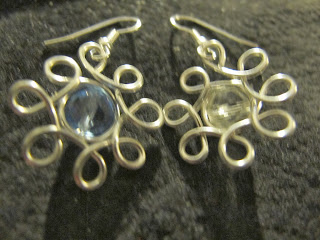 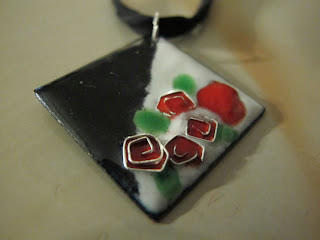 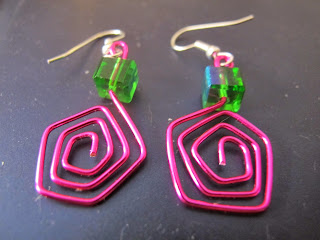 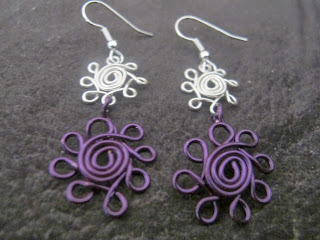 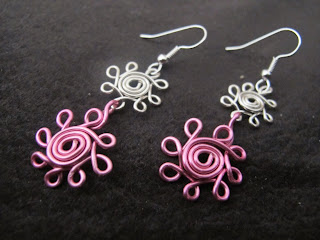 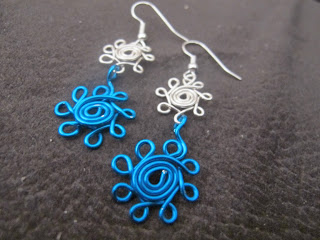 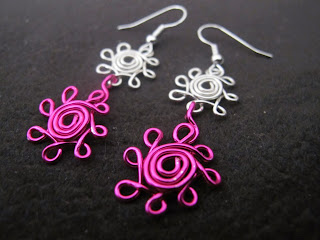 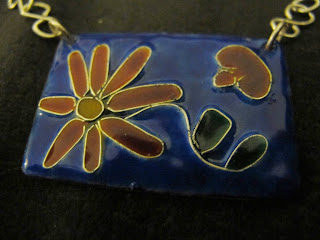 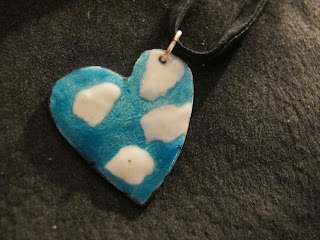 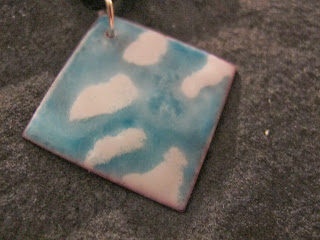 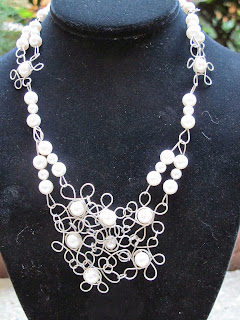 March is always pretty quiet in the retail industry and this year is no exception. I haven't made as many jewelry sales, mainly because Christmas and Valentine's Day are over and we still have some time before Mother's Day. It's still been busy, though! This is the proverbial calm before the storm.

I'm still working on my Morrocan-inspired enamel and wire wrapped bib necklace. We didn't have class this week, but I just got a new shipment of light blue square crystals, which I'm going to hang between the square tiles and the long, skinny pieces. They'l break up the pattern on the enamel pieces and add some extra "zing" to the necklace. This piece is taking me forever to finish, but I'm done with the squares and am about a third of the way through with the skinny blanks. So I'm getting there! 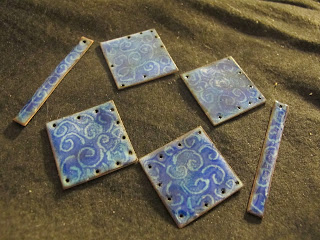 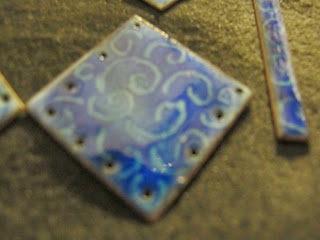 I haven't worked on any other new jewelry designs because I've been putting so much energy into this necklace, but I am gearing up for spring, which is the start of the craft fair season. I didn't do so well with fairs last year and would like to have a more active season. So far, I'm planning to do a charity fair with my friend Christopher, who works for a United Cerebral Palsy school. I'd also like to sell at some fairs in Manhattan. The registration fees are a little higher, but it'll be worth it if I sell more pieces.

Meantime, I'm working on my writing. Yeah, I feel like two different people sometimes, but I love to write and I love making jewelry! I'm finishing up a memoir writing class and signed on for a class on writing children's books. I'm also editing my second novel and plan to send it to some agents. I haven't forgotten about my jewelry book -- I still need to do that, too.

This has been a long, cold, hard winter in NY and I'm glad it's over. Just one more day until spring! Please check out my wire wrapped and enamel jewelry at Naomi's Designs and MayaGirl Creations. And check out my novel REVENGE OF A BAND GEEK GONE BAD, just $1.99 on Amazon.

This Valentine's Day, my husband gave me a really nice surprise: the chance to accompany him on a business trip to El Paso, Texas. He has a client who's based in Las Cruces, NM, so we flew into and stayed in El Paso, which is about a half hour away. We then traveled around that area of Texas and New Mexico for the next few days. The trip was last-minute -- and we flew out in the middle of a storm! -- but we had a wonderful time.

I've always loved the Southwest. The scenery is amazing, especially in the National Parks and there is a lot of history to take in. My parents first took me to that area of the country when I was 8 and we spent the summer driving across the United States. We visited pretty much the entire area: Utah, Nevada, Arizona, New Mexico and Colorado. We went back to that part of the country when I was 17; I then traveled there with Jon a few times. However, until this past trip I'd never been to Texas! Now I can add another state to my list.

When in the Southwest, I almost always purchase some type of jewelry. Much of it is made by the various Native American tribes; in fact, you often see stands on the sides of roads where pieces are sold -- and where you can watch the artists make their items. I don't know what the prices are like these days, but when I was a kid, you could buy a handmade shell necklace for just a few bucks... which was way underpriced for the labor put into these items. I still have a few of my pieces, including a purple shell butterfly necklace, but after making my own jewelry, I have much more respect for these artists' talents and craftsmanship. On this trip, I bought a handmade clay pin, which was made by a regional artist. Since I don't make pins, I figured I'd buy something that will help support a local jewelry designer.

One thing that I love about Southwestern-style jewelry are the colors. A lot of reds, blues, blacks and silvers are used. I like that color combination because the hues are extremely vibrant. I've used these colors in a few of my wire wrapped jewelry designs. I have a long way to go before I can make pieces that are as intricate and complex as some that I've seen in, say, Arizona, but here are a few of my Southwest-inspired items. You can see more of my jewellery at Naomi's Designs and MayaGirl Creations. 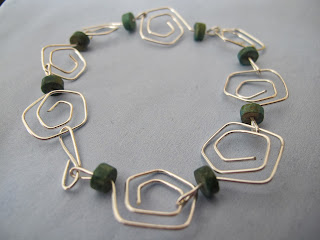 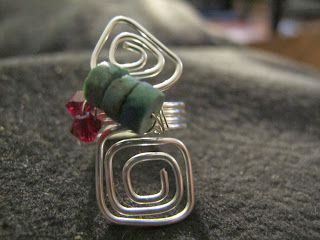 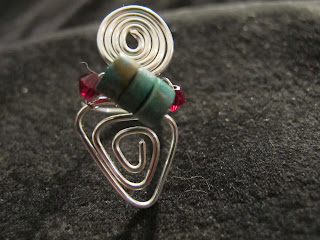 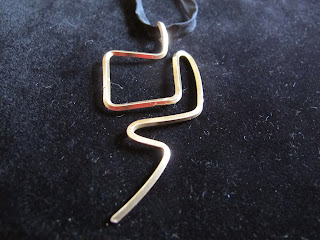 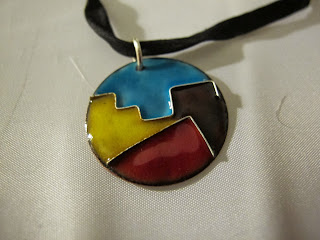 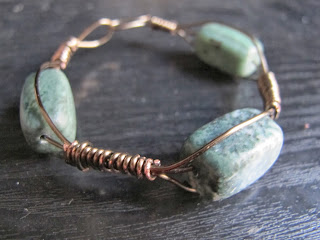 My latest enameling project is my largest and most detailed so far. I'm making a bib necklace that's going to be constructed of over 40 separate enameled pieces. Each piece has a sgraffito design so it's turning out to be a lot of work!

Here are a few pieces that I've done so far: 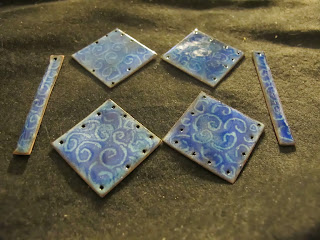 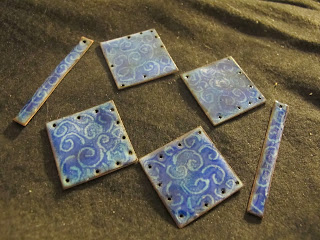 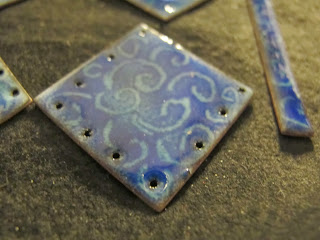 The squares are going to make up the base of the necklace and the long strips are going to hang from them, making up the bib. There will be a layer of blue square crystals in between. And I still have to make the wire wrapped chain. In other words, this thing is going to have about a million parts and is going to take me all semester to complete.

I saved myself a tiny bit of labor by purchasing ready-made 24 gauge copper blanks. Still, I have so much to do! When enameling, you actually have to put layers of glass on each side so that the piece is stable and doesn't bend from the weight of the glass. So I've had to put three layers of counter on each blank to match the three layers of glass on the front (for the front, I use a foundation of white enamel, then add aqua and Prussian blue). To get the swirls, I'm using a wire and etching out the design while the top layer (the darker blue) is still in powder form. When I heat the pieces, the swirly pattern comes out.

As of now, I've completed the squares. I like how they turned out because they look like Moroccan tiles. There's a tiny bit of burning in the center, but the darker sections make them look even more like tiles, I think.

I'm having a more difficult time with the strips. For one thing, they're really hard to flatten. I've applied extra counter, I've put them under an iron while they're still hot... but they have a slight curve to them. I might just have to keep them that way.

There are also so many of them to do! I have only seven squares, but over 30 strips... so it feels like a never-ending task. However, I just saw the movie Tim's Vermeer, in which an inventor makes his own version of a Vermeer painting in order to prove that the artist used optics and lenses. At one point, the inventor spent days and days simply painting tiny dots to bring out the fibers in a blanket. At least I'm making swirls, which is fun. I could be creating literally millions of dots, which would get old pretty quickly!

I'm excited about this necklace, though. It's unlike anything else I've done so far and is going to be really cool when it's complete. So stay tuned! My silver wire wrapped enamel tile necklace will be finished... someday.

Meanwhile, check out the rest of my wire wrapped and enamel jewellery at Naomi's Designs and MayaGirl Creations.

I'm constantly updating items in my Etsy shops, Naomi's Designs and MayaGirl Creations. I still have some work to do on the latter, but at this point I have well over 300 items listed in Naomi's Designs! Here is a sample of what I'm selling in my latest Etsy Mini gallery: